In Sports News this Monday: The Czech Republic just about hang on at Ice Hockey World Championship – and now need to beat Norway to reach playoffs; defeat for leaders Plzeň allows Sparta to cut gap to two points with three rounds to go in soccer league; Kweuke gets 12-match ban for leg-breaking “tackle”; and Nicholas Kemboi wins Prague Marathon. 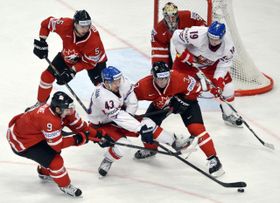 Czech Republic - Canada, photo: CTK The Czech Republic are still at the Ice Hockey World Championship in Sweden and Finland, but just by the skin of their teeth. Except for a victory by Switzerland over Norway on Sunday, Alois Hadamczik’s misfiring team would have seen all hopes of progress dashed with one group stage game remaining. The Czechs had found themselves on very thin ice after a 2:1 defeat to Canada earlier in the day, which ironically was one of their best performances to date. Defender Ladislav Šmíd summed up the team’s mixed emotions shortly after that match.

“It’s a disappointment. It’s a pity we couldn’t have played like that from the start of the tournament. It was like night and day. Everybody fought…we had a lot of chances, but unfortunately things haven’t gone our way from the start of the tournament. I think we were more than an even match for Canada. It’s just a pity we didn’t manage to pick up a point.”

In order for the Czechs to advance to the playoffs at the Worlds, they need any kind of victory – including in overtime or on penalties – over Norway on Tuesday evening. There has been some good news for Czech fans ahead of what will surely be a nail-biting clash: NHL players Tomáš Plekanec and Marek Židlický have arrived in Stockholm and should provide a much needed boost. 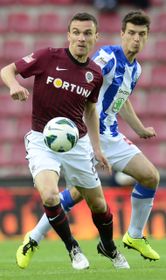 David Lafata, photo: CTK The race for the Czech soccer league title has opened up again, after leaders Viktoria Plzeň slipped up with a 1:0 home defeat to Slavia Prague on Saturday. Second-placed Sparta Prague were five points behind going into the weekend but have now cut that gap to only two, after a 4:0 trouncing of Mladá Boleslav in the capital. That result followed a first hat-trick for Sparta from David Lafata, who had not been looking sharp in previous games.

“I’m glad I scored but I wasn’t looking at it like that – we weren’t doing well collectively. Of course we’d like to play beautiful football, but I think the most important thing is to win. Everybody goes through sticky patches and unfortunately ours came at the worst possible time. We have to do everything to end it. Hopefully we’ve succeeded in that and we’ll manage the remaining games.” 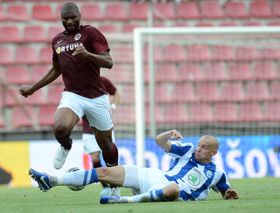 Leonard Kweuke, Radek Dosoudil, photo: CTK In the remaining three rounds Sparta will have to do without Leonard Kweuke, who is serving a 12-match ban. The Cameroonian striker received that punishment for a brutal two-footed lunge that broke the leg of Mladá Boleslav defender Radek Dosoudil in two places during a recent cup game. 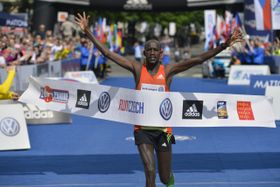 Nicholas Kemboi, photo: CTK Sunday’s Prague Marathon was won by Nicholas Kemboi, who was born in Kenya but is now a citizen of Qatar. His time of 2:08:51 was three minutes short of the course record and the slowest winning time seen in five years. The women’s race was won by Caroline Rotich of Kenya in 2:27:00.