Tomáš Berdych, photo: Francisco Diez, CC BY 2.0 The Czech men’s tennis number one, Tomáš Berdych, is trying to put his recent experiences at Wimbledon behind him as he prepares for a first round match at the world’s oldest tournament on Tuesday. A 2010 finalist, last summer Berdych suffered a shock defeat in round one at Wimbledon – and lost at the same stage in the Olympics, whose tennis competition was also held at the All England Club. Berdych says that double-whammy was actually only a blip.

“It ended with the Olympics and after that everything was good. It didn’t linger and it’s not something that’s remained with me. It was a long time ago. I’m certainly not unsure of myself. You know how ready you are. It’d be the beginning of the end if you didn’t believe in yourself.”

Berdych takes on Martin Kližan of Slovakia in the first round. Meanwhile, Petra Kvitová, who lifted the women’s title at Wimbledon in 2011, takes on Coco Vandeweghe of the US on Monday evening, after the recording of our programme.

In ice hockey, David Krejčí has won the Golden Hockey Stick award for Czech player of the year for the first time. However, the centre, who is 27, was on the losing side on Saturday as his Boston Bruins fell 3:2 behind on games against Chicago Blackhawks in the Stanley Cup final. Krejčí and veteran Czech teammate Jaromír Jágr will be hoping they can help turn things around for the Bruins in Game 6 in the best-of-seven series. 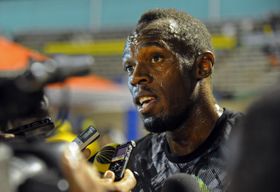 Usain Bolt, photo: CTK There has been bad news for Czech athletics fans with sprint superstar Usain Bolt pulling out of the Golden Spike meeting, which begins in Ostrava on Thursday. The fastest man ever says he needs to train at home in Jamaica. Golden Spike organizer Alfonz Juck isn’t questioning Bolt’s decision.

“He has evidently been unhappy with the times he has been achieving. We’ve understood that, and immediately made an agreement with him to come next year. He’s been accommodating to Ostrava so many times in the past that it’s only right that we show understanding for his needs. And I’m sure that’s how his fans in Ostrava will see it.” Roman Šebrle, photo: CTK Staying with athletics, and after previously indicating that injury would prevent him from competing again, decathlete Roman Šebrle has officially confirmed the end of his career. Šebrle, who is 38, was Olympic champion in 2004 and also holds the points record in his discipline.

The Czech athletics team were clear winners in the two-day European Athletics Championships Team 1st League in Dublin at the weekend. That means the Czechs have qualified for the elite Superleague team competition, which will be held in Germany’s Brauhschweig next year.