In Sports News this Monday: Kreuziger comes fifth in Tour de France; champions Plzeň and title contenders Sparta start season with wins; Czech sides have work to do in European competition qualifiers; Koller is back – playing beach soccer; and is Jágr set to team up with Eliáš at New Jersey? 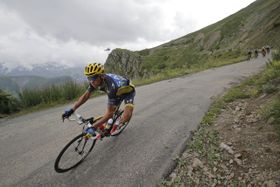 Roman Kreuziger, photo: CTK The Czech Republic’s Roman Kreuziger, who at one point was third overall, finished fifth in cycling’s Tour de France at the weekend. Kreuziger is by some distance the most successful Czech cyclist of all time and his fifth place was the best result ever achieved by a Czech in the sport’s most prestigious event. As part of the Saxo-Tinkoff team, the 27-year-old all-rounder was supporting former winner Alberto Contador of Spain, who came in fourth overall. Czech Paralympic cyclist Jiří Ježek says Kreuziger’s sterling work this year may well pay off in the future. Alberto Contador, photo: CTK “You could say Roman was a super team rider. His task was to look after Contador. His professionalism was clear during a week when Alberto wasn’t in top form and Roman kept a cool head. I think he’ll be repaid in terms of his standing in the team, because not everyone can keep their ambition in check when they see that they’re riding better than their team leader. Sticking to team discipline is terribly difficult.” 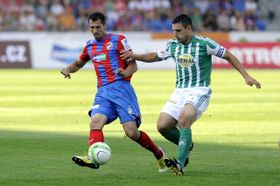 Viktoria Plzeň - Bohemians 1905, photo: CTK The 2013–2014 season got underway in Czech soccer’s Gambrinus Liga at the weekend. Reigning champions Viktoria Plzeň got off to the perfect start with a 5:0 home walloping of freshly promoted Bohemians 1905. Likely contenders Sparta Prague, who are now captained by David Lafata, also impressed in their first game of the new season with a 4:1 away win over Jihlava. And Liberec and Teplice also opened their accounts with three points with victories over Olomouc and Slovácko, respectively.

Czech clubs have work to do in European competition qualifiers Sparta Prague - Häcken, photo: CTK Plzeň have now travelled to Sarajevo where they will face local side Željezničar on Tuesday in the second leg of their Champions League second round qualifying tie. The West Bohemian side go into that match with a 4:3 lead from last week’s first leg. Sparta, meanwhile, have a tougher task in front of them in a Europa League qualifier on Thursday, after drawing 2:2 in Prague with Sweden’s Häcken. And Liberec will be hoping to make home advantage pay in the same competition, following a 2:1 away defeat to Skonto Riga last week. 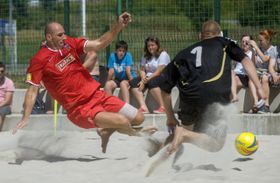 Jan Koller, photo: CTK The all-time record scorer for the Czech national side Jan Koller has made a comeback of sorts, playing beach soccer. The big man, who is now 40, scored on his debut for the Czech Republic in a 5:2 win over Slovakia at the weekend.

Jaromír Jágr, photo: Czech Government Archives It appears that Jaromír Jágr may be about to hook up with another Czech ice hockey veteran, Patrik Eliáš; Jágr is reported to be on the verge of signing a one-year deal with the New Jersey Devils, with whom Eliáš has been playing, with interruptions, since 1994.