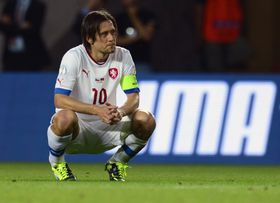 Tomáš Rosický, photo: CTK The Czech Republic’s prospects of reaching the playoffs for next year’s World Cup were far from rosy before a game against Armenia on Friday evening. However, a 2:1 defeat at Prague’s Eden Stadium has left them with very little chance of making it to Brazil. The visitors went ahead on the half-hour mark before Czech captain Tomáš Rosický pulled one back with 20 minutes remaining. But that goal was too little too late, and Armenia struck again in time added on to break Czech hearts. Rosický blamed the team’s failure on their poor finishing.

“In a game like that, when you have as many chances as we did, you have to press home your advantage and two players have to follow up a ball. We were lacking that hunger. It cost us the game. And not just this game – converting our chances was also a problem in the previous ones, so it wasn’t a coincidence.”

The Czechs would need to win all three of their remaining qualifiers to keep their playoff hopes alive. That is a tall order, though, as their next game is away to four-time World Cup winners Italy on Tuesday, with the hosts hoping to seal qualification. If the Czechs don’t take all three points in Turin, coach Michal Bílek could well be looking for a new job in the very near future. 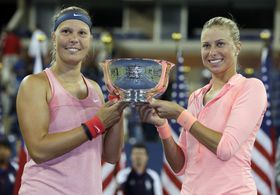 Lucie Hradecká, Andrea Hlaváčková, photo: CTK Though Czech singles players didn’t get very far at tennis’s US Open, it was a completely different story in the doubles competitions: Andrea Hlaváčková won the mixed doubles with Max Mirnyi of Belarus and the women’s doubles with compatriot Lucie Hradecká, while Radek Štepánek lifted the men’s doubles trophy with India’s Leander Paes.

Hlaváčková and Hradecká took their title after a 6-7 (4-7) 6-1 6-4 victory over Australia’s Ashleigh Barty and Casey Dellacqua, the pair who denied them gold at last year’s Olympics. Speaking after Saturday’s final, Hlaváčková said a less than ideal start had helped the Czech duo this time out.

“I was glad the first set was close; I said to myself, we didn’t play well, or at least I didn’t play well, but still it was close. So if we step it up a bit, we’ve got a great chance. But the end was incredible – anything could have happened. We won because we played courageously. That’s the strength of our play – and we have to remember that in future matches.”

Hlaváčková and Mirnyi had been crowned champions at Flushing Meadows after seeing off Abigail Spears of the US and Santiago Gonzalez of Mexico 7-6 (7-5) 6-3.

Meanwhile, Štepánek and Paes overcame the Austrian-Brazilian pairing Alexander Peya and Bruno Soares 6-1 6-3 on Sunday to take their first US Open title together. Paes has quite a history with Czechs, having previously won the competition with Martin Damm and Lukáš Dlouhý and partnered Martina Navrátilová. 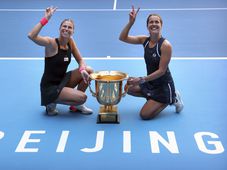 In sports news this Monday: Hlaváčková and Strýcová triumph at the China Open; the national football team faces first matches under… 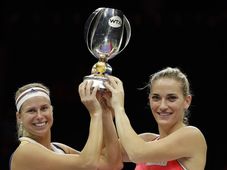