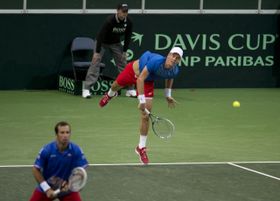 Radek Štěpánek, Tomáš Berdych, photo: CTK Defending champions the Czech Republic have reached the final of tennis’s Davis Cup for the third time in five years. The Czechs, led by the heroes of last year’s final Tomáš Berdych and Radek Štěpánek, made relatively light work of Argentina in Prague. The pair took control with wins on day one, before on Saturday overcoming Carlos Berlocq and Horacio Zeballos 6-3 6-4 6-2 in the doubles to open up an unassailable 3:0 lead on matches. Getting to the final once again has been a particular satisfaction for the veteran Štěpánek, who was forced to undergo surgery on his spine at the beginning of 2013.

“If somebody had told me after that operation at the start of the year that this would happen, I wouldn’t have believed them. I’m glad that it’s worked out this way, and that I’m healthy and can play without restrictions. The fact we’ve achieved this twice in a row is incredible. It gives me a real boost – I appreciate it a lot.”

Standing between the Czechs and an historic second win in a row will be a Serbian team that includes world number one Novak Djokovic. What’s more, the mid-November tie will take place in Serbia and most likely in Belgrade. That will impact the final, says the Czech Republic’s non-playing captain Jaroslav Navrátil.

“We know it’s one of the worst environments to play in. Thousands of football fans come out there – they aren’t tennis fans like our fans or the fans of Argentina. We’ve experienced that stormy environment before and it was a real struggle. It means we have to prepare more thoroughly if we are to succeed.” 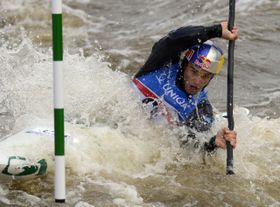 Vavřinec Hradilek, photo: CTK The Czech Republic had a very successful World Canoe Slalom Championship, which was held this year at Prague’s Troja. Indeed the hosts took three gold and three silver medals to become the most successful team there. The winners were: Vavřinec Hradilek in the K1M category; the women’s kayaking team (featuring the evergreen Štěpánka Hilgertová); and the men’s team in the double boats competition. Big crowds cheered on the home team, with an estimated 5,000 turning out on Sunday. 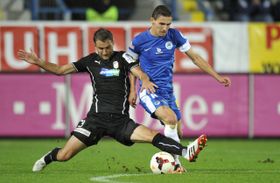 Slovan Liberec - Viktoria Plzeň, photo: CTK Title-holders Viktoria Plzeň may lose their place at the top of the Czech soccer league, after a 1:1 draw away to Liberec on Saturday. Sparta can pull two points clear of the West Bohemians on Monday evening, if they overcome Znojmo away.

…ahead of home Champions League game against Man City

Perhaps Plzeň slipped up because they had one eye on Tuesday night, when they welcome the stars of Manchester City for their opening Champions League group game at Štruncovy sady. “Viktorka”, who have been going great guns so far this season, will no doubt be hoping to capitalize on City’s unimpressive form to date in the Premier League. The other clubs in their group are holders Bayern Munich and CSKA Moscow.