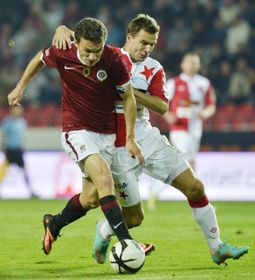 David Lafata, Martin Dobrotka, photo: CTK Slavia and Sparta had contrasting fortunes ahead of Saturday’s 280th Prague soccer derby, with the former going into the game in the relegation zone and the latter as league leaders.

The charged derby atmosphere did not help the hosts upset the form book; Sparta took the lead on just after the hour mark thanks to a well-taken free kick by Lukáš Vácha, a former Slavia youth team player, while another, Bořek Dočkal, sealed a 2:0 victory with a deflected strike in the closing minute.

Just prior to the second of those goals, Slavia captain Karol Kisel was sent off for a second yellow card for clashing, evidently innocuously, with Sparta keeper Tomáš Vaclík.

The visitors had taken a cautious approach at the Eden Stadium – a game plan that Sparta boss Vítězslav Lavička said had served them well.

“Our aim was to play it safe at the back, without taking risks. Perhaps we sacrificed attacking play for the sake of a more compact defence in a particular phase of the match. But when we got the chance to break we attempted to seal the result – and I think the second goal was testament to that.”

Slavia went into Saturday’s game after a run of six defeats in eight games but did show some signs of improvement under new manager Miroslav Koubek. Midfielder Kisel said that was scant consolation. 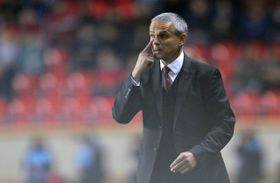 Vítězslav Lavička, photo: CTK “Of course it pleased me, but it wasn’t enough. We need points. We wanted to turn everything around in the derby and at least get a point. We did all we could – and that’s the way to move forward – but once again the points slipped away from us today, and we’re not pleased.”

The derby was marred by crowd trouble, with police making a total of 82 arrests on charges including disorderly conduct and promoting fascism.

Viktoria Plzeň remain four points behind Sparta in second spot following a 2:1 away win over Jihlava. The West Bohemians face CSKA Moscow in Saint Petersburg on Wednesday in the Champions League. 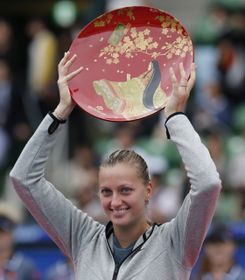 Petra Kvitová, photo: CTK Petra Kvitová won the Pan Pacific Open in Tokyo at the weekend to give the Czech women’s tennis number one her second WTA title of the season. The final, against Angela Berger of Germany, was something of a rollercoaster, but Kvitová was able to recover from a whitewash in the second set to eventually win 6-2 0-6 6-3.

Kvitová has had a mixed time of it since 2011, when she won Wimbledon. However, the 23-year-old showed flashes of her best in Japan, a fact that could perhaps be attributed to the work of her new fitness coach, Marek Všetíček.

After slipping out of the top 10, Kvitová is now back at seventh in the world rankings – and in with a better chance of reaching the World Tour Finals in Istanbul.