In Sports News this Monday: Four teams at top of ice hockey’s Extraliga have 19 points, with Pardubice ahead on goal difference; veteran Radek Dvořák scores twice in two games for Carolina; Czech women pick up bronze at European Table Tennis Championships; and country’s soccer team only have pride to play for in remaining World Cup qualifiers.

Leaders Pardubice one of four Extraliga teams on 19 points Třinec - Slavia Prague, photo: CTK After 10 rounds of ice hockey’s domestic Extraliga, four clubs are on 19 points at the upper end of the table, with Pardubice ahead of Slavia Prague, Kometa Brno and Třinec, in that order, thanks to superior goal difference. The East Bohemian club hit top spot after an away win over defending champions Plzeň on Sunday, with the score in that game 4:5 after penalties. Forward Lukáš Radil scored twice during the shootout to give Pardubice a two-point win.

“It’s just brilliant. We’re in form, we’re scoring a lot of goals. It’s still not working perfectly at the back, but it’d be very simple if we didn’t have anything to improve. Naturally, I’m pleased that I converted the two penalties – it’s great.”

Two of the teams on 19 points played each other on Sunday evening, with Třinec drawing level with Slavia after a 4:3 victory. That was Třinec’s fourth win on the trot. Elsewhere, Sparta Prague lost on their own ice for the first time this season; despite a hat-trick from Jaroslav Hlinka, they went down 4:6 to Vítkovkice in the capital. 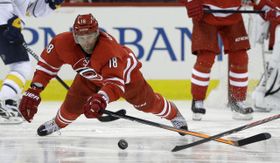 Radek Dvořák, photo: CTK Across the pond, Radek Dvořák may have only signed with the Carolina Hurricanes two days before the NHL started, but he’s paying back the club’s faith, with two goals in two games. The veteran forward scored the decisive goal on Sunday in Carolina’s first win of the season, 2:1 over Philadelphia. Jiří Hudler, meanwhile, is the most productive Czech in the league so far this season, with two goals and two assists for Calgary; the latter came on Sunday in a 4:5 defeat at the hands of Vancouver. 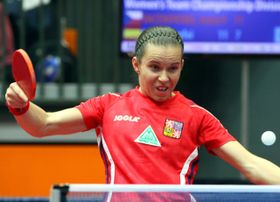 Iveta Vacenovská, photo: CTK The Czech women’s table tennis team took a commendable bronze at the European Championships in Austria’s Schwechat at the weekend. The Czechs earned the medal after making the semi-finals, where they lost 1:3 to the Germans with their only win coming from Renata Štrbíková. Her team-mate Iveta Vacenovská had soundly beaten European number one Viktoria Pavlovich of Belarus in the previous day’s quarter-finals. However, she was no match for Germany’s Chinese-born Nan Ying.

“The basic reason for our defeat was that I’d never played Nan Ying before. She has an entirely different style than Viktoria – and that was decisive. The Germans confirmed my expectation that they wouldn’t fear us and would select Nan Ying as their number one player – and she knocked us out.” 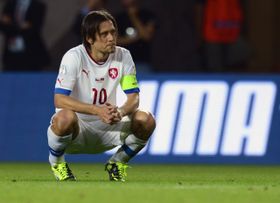 Tomáš Rosický, photo: CTK The Czech international soccer squad have been gathering in Prague ahead of the final two games of their World Cup qualification campaign, away to Malta on Friday and to Bulgaria on Tuesday. However, the Czechs – without captain Tomáš Rosický, who is not fully fit – will be playing for their pride alone, as they no longer have a chance of reaching Brazil.