In Sports News this Monday: Czechs flounder at ice hockey Worlds with first ever loss to Denmark – Jágr calls for more teamwork; Sparta take the Czech cup after an 8:7 win over Plzeň in penalty shootout; Czechs preparing to face Finland in friendly; and Rosický wins FA Cup, his first trophy at Arsenal. 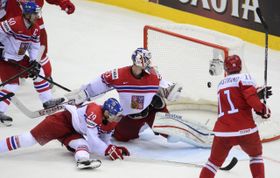 Czech Republic - Denmark, photo: CTK The Czech Republic have not been having the best of tournaments so far at the Ice Hockey World Championship in Belarus. Indeed, it was a genuine shock when Vladimír Ružička’s men lost to Denmark on Saturday.

The Czechs had been leading 3:1 with just 20 seconds remaining but conceded twice before being beaten on penalties. It was the first time they had ever lost to the Danes at a World Championship.

Afterwards a disappointed Jaromír Jágr said the team had to improve in all areas – and start performing as a unit.

“It was a slap in the face but a necessary one. If that doesn’t wake us up then nothing well. During the game we didn’t help one another out or double up. You can’t play hockey one on one. We need to improve – and it doesn’t matter if it’s in attack or defence – and double up on our opponents. But that would involve skating a bit more. One player plays and four others just watch him – you can’t play that way at any level.” 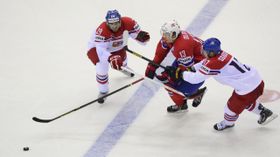 Czech Republic - Norway, photo: CTK The Czechs did better in their next game on Sunday, though overcoming Norway just 1:0 won’t have given fans too much cause for optimism. Now they need to overcome France on Tuesday if they are to avoid a quarter-final clash with the fancied Russians and a potential early flight home.

Meanwhile, an IIHF official has apologised to the Czech Republic for two goals allowed against them that should not have stood. One helped the Danes take that game to 3:3 and overtime; the other was a 3:4 defeat to Sweden. 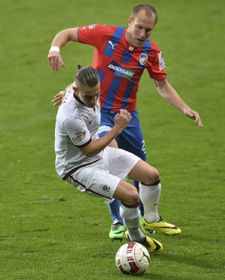 Plzeň - Sparta Prague, photo: CTK Saturday’s Czech soccer cup final had added spice this year as it pitted league champions Sparta Prague against their current biggest rivals Viktoria Plzeň. Plzeň, league runners up, looked set to have salvaged something from the season when they went ahead in the 74th minute and led going into time added on.

However, in the 94th minute Sparta equalised through a spot kick, forcing the game to penalties. And it was an unusually tight and long shootout, with Sparta eventually winning 8:7.

The last of their penalties was converted by defender Pavel Kadeřábek – after nine of his teammates had stepped up.

“I knew that I was the last man and that all the other outfield players had taken one. Tomáš Vaclík asked if I would take it, or whether he should go before me. But I said it’d be a real disgrace if I let the goalie go before me. The first five takers were clear, and then we agreed one by one. I wasn’t in a hurry to take one and I thought it’d be settled before I had to go. But then it fell to me.” 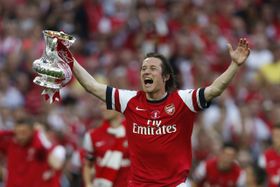 Tomáš Rosický, photo: CTK Kadeřábek is one of six Sparta players who have joined the Czech squad for a friendly against Finland in Helsinki on Wednesday. They and their teammates will no doubt be congratulating captain Tomáš Rosický. The midfielder won the FA Cup with Arsenal on Saturday, his first trophy in eight seasons at the English club.