In Sports News this Monday: relegations are decided on the last day of the Gambrinus League; Sparta Prague make it a hat trick at end of season awards; Tomáš Berdych makes it to the French quarter-finals; javelin thrower Vitězslav Veselý tops the Diamond League, and Zlín’s Petr Čajanka puts his retirement on ice. 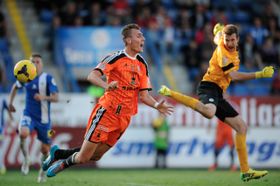 Slovan Liberec - Sigma Olomouc, photo: CTK With the league title wrapped up by Sparta Prague several weeks ago, the main issue on the final weekend of Gambrinus League games over the weekend was the relegation battle at the opposite end of the table. Four teams, including Slavia Prague and Bohemians 1905 were threatened with the drop but in the end it will be Sigma Olomouc and newcomer SC Znojmo that will be playing in the lower division next season. Olomouc has been a top league performer for the past 30 years and won the Czech cup competition in 2012. 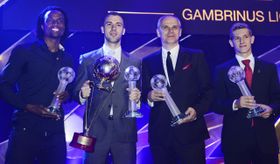 Costa Nhamoinesu, Josef Hušbauer, Vítězslav Lavička, Patrik Hrošovský, photo: CTK In the league’s curtain closing awards on Sunday, Sparta Prague almost made a clean sweep of it. Midfielder Josef Hušbaur was voted player of the year. He is the only midfielder that has become the league’s top scorer. This is what he said about the club’s goals for next season: ‘I believe we will get though the qualify stages of the Champions League with Sparta and we will get through to the groups stage which is our particular target. And I also hope that we can pull off the league and cup double again next year.’

Sparta’s Vitězslav Lavička was voted best manager; and the best foreign player was the Prague club Zimbabwe defender Costa Nhamoinesu. The only intruder to the party was Viktoria Plzeň’ midfielder Patrik Hrošovsky who was named find of the year. 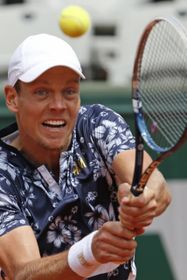 Tomáš Berdych, photo: CTK In tennis, Tomáš Berdych and Lucie Šafářová have both made it through to the second week of the French Open. The Czech men’s number one is already in the quarter-finals where he faces the man who defeated Roger Federer, Latvian Ernests Gulbis. Berdych defeated American John Isner in straight sets and this is what he said after that match: ‘Of course I am confident, if you win four matches you feel good and that is my case. And whoever is going to win and be my opponent I am going to try my best and play good tennis.’

Šafářová was due on court Monday against Russian Svetlana Kutnetzova who defeat Czech player Petra Kvitová in the previous round.

Czech javelin thrower Vitězslav Veselý won the Diamond League event in Eugene, the United States, with a third throw of 83.75. That was more than three metres ahead of second placed Norwegian Andreas Thorkildsen. Veselý now heads the prestigious league competition after three rounds. In the pole vault, Jan Kudlicka came third and is now placed in fourth place in the Diamond League rankings. 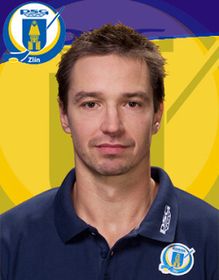 Petr Čajánek, photo: archive of HC Zlín And finally, to ice hockey where the veteran centre of league champions Zlín, Petr Čajánek has decided to play for one more year. Speculation was high that the 38-year-old team captain would call it a day after last season’s success but he has now indicated he wants to continue. Zlín beat Brno 4:1 at the end of April to become league champions.