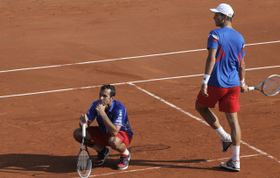 Radek Štěpánek, Tomáš Berdych, photo: CTK The Czech Republic’s phenomenal run in tennis’s Davis Cup has come to an end. The Czechs lifted the trophy in 2012 and 2013 but dreams of an historic hat-trick were dashed in a semi-finals defeat against France in Paris at the weekend. An out of form Tomáš Berdych lost to Richard Gasquet in the opening singles rubber on Friday, before Lukáš Rosol’s defeat to Jo-Wilfred Tsonga left the visitors on the ropes. Doubles pair Berdych and Radek Štěpánek have been the star men for the Czechs in recent years but this time out failed to produce, losing in four sets to Gasquet and Tsonga as the hosts took an unassailable 3:0 lead on Saturday.

Berdych, 28, and Štěpánek, 35, have both sat out Davis Cup ties in the past and indications are that in the future they may only appear in first rounds or playoffs in order to safeguard the country’s position in the elite World Group. But even then they may only appear if prospective ties don’t involve gruelling long-distance travel, meaning a lot could depend on Thursday’s draw for next season.

Meanwhile, non-playing captain Jaroslav Návratil has one more year to run on his contract but says he can’t imagine being involved in the Czech set-up without Berdych and Štěpánek, giving the impression that a golden era for the Czech Republic in the Davis Cup may very well have come to an end.

High profile game abandoned because of fog as Extraliga resumes 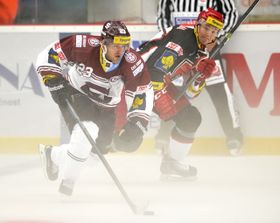 Illustrative photo: CTK The new season in the Czech ice hockey Extraliga got underway after the summer break at the weekend but the league’s organisers were left with egg on their faces after a high-profile game had to be abandoned because of fog over the ice. The match, which was live on TV, pitched Brno against Zlín in a repeat of last term’s playoff finals but only lasted 13 minutes before the umpires decided it could not continue. It will now be rescheduled. 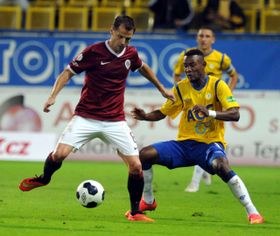 Teplice - Sparta Prague, photo: CTK Defending Czech soccer league champions Sparta Prague have continued their stuttering start to the season. After bouncing back from two defeats in a row with a win in the last round, Sparta again dropped points at the weekend when they were held to a 0:0 draw away at Teplice. The title-holders’ main rivals of recent years, Viktoria Plzeň, are just ahead of them on goal difference and can pull three points clear at the top of the table if they beat Liberec on Monday evening, after the recording of our programme. 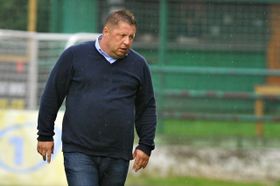 Petr Čuhel, photo: CTK Příbram’s Petr Čuhel has become the latest Czech top flight manager to get the boot this season. The team only have two points after seven games and are bottom of the table; the final straw came on Sunday when they went from winning 1:0 against Jablonec with 20 minutes to go to losing 4:1. Čuhel has already been replaced by Pavel Tobiáš, who helmed Příbram in the past and has also managed České Budějovice, Slavia and Brno.