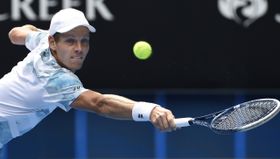 Tomáš Berdych, photo: CTK The Czech men’s number one Tomáš Berdych has made it through to the last eight at tennis’s Australian Open after overcoming local player Bernard Tomic 6:2 7:6 6:2 on Sunday. Next up for the world number seven should be a stiffer challenge in the form of Rafal Nadal. Indeed, the Spaniard is very much a bogey-man for Berdych, who hasn’t beaten him in 17 attempts over a period of over eight years. But will it be different when the pair meet in Tuesday’s quarter-final? There has been speculation about Nadal’s fitness, while the Czech has had a pretty much perfect tournament to date. But Berdych says he is just focusing on his own game.

“I’m not going to pay attention to all that stuff: if Rafa will be fit, if he won’t be fit, etcetera, etcetera. Once a player decides to take part in a tournament I think he has enough sense to know what he needs to do… I’m looking forward to it. I’m in the best position that I could be in at this stage, and that gives me confidence – and I’ll take that into the next match.”

Kvitová exits in third round in Melbourne 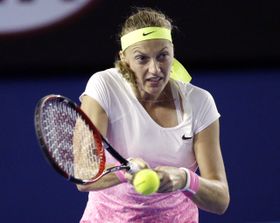 Petra Kvitová, photo: CTK The leading Czech women’s player, Petra Kvitová, left Melbourne early after a third-round 4-6 5-7 defeat at the hands of American teenager Madison Keys. The fourth seed at least did better than last year, when she suffered a shock first round exit in the first Grand Slam tournament of the year. 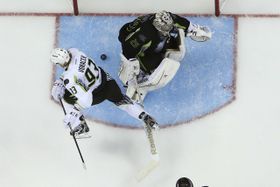 Jakub Voráček, Marc-Andre Fleury, photo: CTK Czech ice hockey player Jakub Voráček notched up a record-equaling six points – for three goals and three assists – in the 2015 NHL All-Star Game in Columbus on Sunday. But the Philadelphia Flyers forward played down the achievement of matching a record set by the great Mario Lemieux, pointing out that three of those points had come from secondary assists. 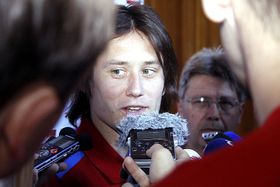 Tomáš Rosický, photo: Miroslav Bureš Czech soccer captain Tomáš Rosický starred in Arsenal’s 3:2 FA Cup defeat of Brighton on Sunday. Rosický bossed the game, setting up one goal and scoring another with a sweetly taken volley. The midfielder began just five games for Arsenal in the whole of 2014 but this year has already made the starting line-up four times. The Gunners’ manager Arsene Wenger paid a nice tribute to the 34-year-old after the game, saying if you love football, you love Rosický.