Czech Republic - Latvia, photo: CTK So far the Czech Republic have been having a mixed time of it at the World Championships, which got underway in Prague and Ostrava on Friday. The hosts came from behind to take the lead against Sweden in their opening game. However, the Swedes equalised late on and eventually won a dramatic encounter 6-5 following a penalty shootout.

The Czech Republic fared rather better on Saturday, overcoming Latvia 4:2 and once again impressing in power plays. Star Jaromír Jágr, meanwhile, became the oldest player to score at a world championship.

Another of the Czechs’ strikes in that game came from defender Michal Jordán. He said he and his teammates had made life unnecessarily difficult for themselves against the Latvians – and praised the enthusiastic home crowd.

“It was a very tough game. We put ourselves in trouble in the first period when we conceded a cheap goal when they had a power play. But again we showed our strength. We didn’t give up and we’re glad of the three points… The spectators are fantastic. They really spur us on. But at the same time we need to calm down – we can’t let it go to our heads.”

The Czech Republic should face a sterner test when they face Canada – fresh from a 10:0 win over Germany – on Monday evening, after the recording of our programme. 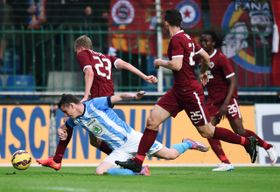 Mladá Boleslav - Sparta Prague, photo: CTK The tension continues at the top of the Czech first division with Viktoria Plzeň and Sparta Prague slugging it out for the title. Plzeň remain three points in front after a comprehensive 4:0 home win over Slovácko on Saturday. But Sparta kept the pressure up the following day, coming from behind to beat Mladá Boleslav 3:2 away.

Right back Pavel Kadeřábek, who got the defending champions’ third goal, says Sparta had to adapt to their opponents’ physical approach.

“It always hurts at Boleslav and we were prepared for that. It was a very important victory. At half time we were losing 1:0 but we stuck together and didn’t give up. I think we deserved to turn the game around and win.”

Sparta can take the title if they win all of their remaining four games – starting with what is sure to be an exciting clash with Plzeň in the capital next Saturday.

At the other end of the table, Hradec Králové and České Budějovice look increasingly close to relegation. Defeats at the weekend left both on 19 points, eight points behind third-from-bottom Liberec. Lucie Hradecká, Karolína Plíšková, photo: CTK The return of tennis’s WTA to Prague last week is being seen as a success. The Prague Open at the city’s Stromovka Park was won by Karolína Plíšková, who beat compatriot Lucie Hradecká in the final for her career fourth title. Indeed, six of the quarter-finalists were Czech in the tournament, which drew 15,000 spectators.