In Sports News this Monday: Czechs reach last eight at “home” ice hockey Worlds with win over Germany but coach Růžička says they must improve; Viktoria Plzeň are within touching distance of soccer league title after defeat of Sparta; České Budějovice and Hradec Králové keep slim chances of staying up alive; and Kvitová wins 16th title in Madrid.

Czechs reach quarter-finals at hockey Worlds but have work to do, says coach 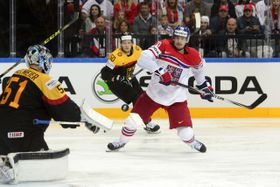 Czech Republic - Germany, photo: CTK The Czech Republic have just qualified for the quarter-finals of the Ice Hockey World Championships, which are now underway in Prague and Ostrava. The hosts secured progress after a 4:2 defeat of Germany at the capital’s O2 Arena on Sunday night. Among the Czechs’ goal scorers was Michal Vondrka. He had expected to be on the bench for the entire game but was sent out by coach Vladimír Růžička in just the first period. It was an inspired move – the Sparta Prague forward scored his first goal of the tournament within seconds.

“Růža [Růžička] tapped me on the shoulder and told me I was going onto the ice. With the first line on the left wing. I didn’t have time to think about it, it was so fast. I didn’t even see Nakládal shooting and wasn’t aware that the puck deflected off me. It was a kind of lucky goal.”

Vladimír Růžička wasn’t claiming any credit for the substitution and immediate goal – and said the Czech team had plenty of work to do ahead of the knockout stage.

“It was a bit of chance, but important. I think it turned the game back in our direction a bit. Our performance improved from the second period and we played decently. But we keep making mistakes and doing badly in the attacking zone. We have to focus on that because it could cost us a game – a quarter-final, for instance.”

The Czechs are currently third in group A and face Switzerland in their last game of that stage on Tuesday night.

Plzeň close in on title with defeat of Sparta 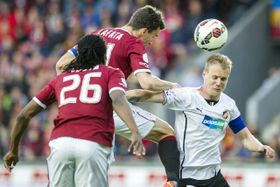 Sparta Prague - Viktoria Plzeň, photo: CTK Viktoria Plzeň look to have this season’s Czech soccer league championship wrapped up after a 2:0 win over nearest rivals Sparta Prague in the capital on Saturday night. The result leaves Plzeň with a six-point lead over Sparta with three rounds to go, meaning one win or three draws would be enough to secure a third title in five seasons for the West Bohemians. To rub it in even more for Sparta, Plzeň’s goals on Saturday came from two of their former players, Jan Holenda and Roman Hubník. Hubník, a balding defender, joked about how he’d managed to bag the visitors’ second – and looked forward to the next round.

“I got lucky. The ball went through the hair that I still have on the back of my head!... We’ve got a six-point lead and we just need one win to take the title. I hope we wrap it up at home against Jihlava.” 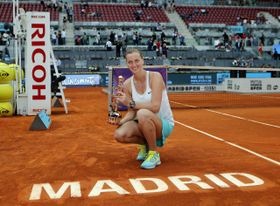 Petra Kvitová, photo: CTK Czech tennis star Petra Kvitová has notched up the 16th WTA title of her career after beating Russia’s Svetlana Kuznetzova 6-1 6-2 in Saturday’s final of the Madrid Open. A day earlier the world number four had achieved her first ever win over Serena Williams in the semi-finals.