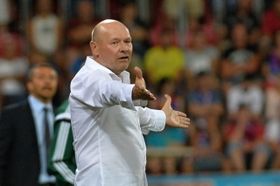 Miroslav Koubek, photo: CTK How quickly fortunes can change. After leading Viktoria Plzeň to the Czech league title last term in his debut season at the helm, manager Miroslav Koubek has become the first top-flight boss to get the boot in 2015–2016.

Koubek’s dramatic exit came after a 2:2 draw with Teplice at the weekend meant that Plzeň had picked up only five points in their opening four games, the lowest tally for a defending champion in more than a decade. The West Bohemians also blew a promising position in their Champions League third round qualifying tie: After winning 2:1 against Maccabi Tel Aviv away they lost 2:0 at home and exited the competition.

Koubek has been replaced by Karel Krejčí, who was assistant to Pavel Vrba during his very successful reign as Plzeň manager. Vrba’s on the field lieutenant, the now retired club legend Pavel Horvath, will serve as Krejčí’s right hand man. 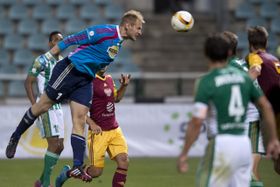 Zdeněk Zlámal, photo: CTK The first goal scored by a goalkeeper in open play in the Czech league was seen at the weekend. Zdeněk Zlámal came up for a corner as his Bohemians 1905 were trailing 2:1 in injury time to Dukla Prague – and headed an equaliser to earn his club a point.

Record turnout for MotoGP in Brno Jorge Lorenzo, photo: CTK Just under a quarter of a million people, a record turnout, attended the Czech MotoGP at Brno’s Masaryk Circuit on Sunday. The race was won by Jorge Lorenzo of Spain, who is joint top on points in the standings with Valentino Rossi, who came third in Brno. The best of the Czechs was Jakub Kornfeil, who finished ninth in the Moto3 category. There had been speculation it could be the final Czech MotoGP at the venue but it was announced after this year’s race that the event will continue until at least 2020.

Lucie Šafářová has qualified for tennis’s prestigious season ending WTA Finals for the first time – in the doubles. Šafářová secured the berth early after she and America’s Bethany Mattek-Sands won their fourth trophy of the year in Toronto on Sunday. The Czech could also qualify for the WTA Finals in Singapore in the singles – she is currently ranked sixth in the world and it is the top eight who make the cut for the tournament. Incidentally, there are now three Czechs in the women’s top seven. Alongside Šafářová, Petra Kvitová remains in fourth while Karolína Plíšková has climbed to seventh. 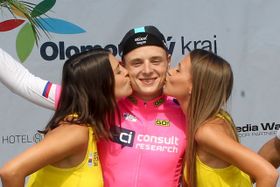