In Sports News this Monday: Fuksa takes gold in 500m at Canoe Sprint World Championships; Maslák fails to make it out of the heats in 400m at World Athletics Championships; and no change at head of Czech soccer league as top three win in round five. 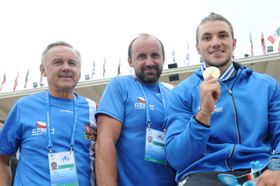 Martin Fuksa (right), photo: CTK The Czech Republic’s Martin Fuksa came first in the 500 metres at the Canoe Sprint World Championships in Milan at the weekend. On Saturday the 22-year-old had narrowly missed out on first place in the 1,000 metres, which features in the Olympic Games, taking silver after finishing just 17 thousandths of a second behind the winner. But Fuksa made no mistake in the 500 metres on Sunday, grabbing gold in a time of 1:51.004. He says he is unconcerned by the fact it is not an Olympic event – and that nothing can take away from the fact he can now call himself world champion.

“I was lacking that title, so it sounds great to my ears. Everything I do is focused on reaching the podium – and standing on its highest point is simply wonderful… I wasn’t thinking at all about the fact I came second yesterday. Yesterday evening I watched the race several times and I really just barely missed out. But that’s how it was meant to be, and today I had a greater appetite for victory.”

Fuksa’s team-mate Josef Dostál will be another canoeist to watch at the Olympics in Rio next year. He took silver in the K1 1,000 metres and was also part of the Czech crew that came third in the K4 1,000 metres. As well as the four medals, the Czech Republic earned six places in Rio at the weekend.

Pavel Maslák (center), photo: CTK Pavel Maslák failed to make it out of the heats in the 400 metres at the World Athletics Championships in the Chinese capital Beijing on Saturday. The reigning indoor world champion, Maslák came fifth at the last outdoor World Championships in Moscow in 2013 but finished last in his qualification race this time out. The entire field was faster: His time in Moscow – a Czech record 44:54 seconds – would have left him just 18th in Beijing.

No change at top of soccer league table after fifth round

It’s “as you were” at the head of the Czech top flight after the fifth round at the weekend. Leaders Sparta Prague overcame Dukla Prague 2:0 in a “mini” derby at their Letná stadium, second-placed Slovácko beat Jihlava 2:1 on the road and Slovan Liberec in third overcame Teplice 2:0 at home. Reigning champions Viktoria Plzeň, who are in sixth, secured a 2:0 home win over Olomouc.

Will Vrba turn to Czech league for partner for Lafata? 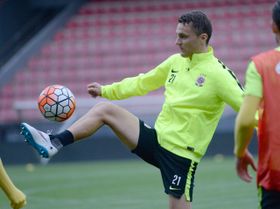 David Lafata, photo: CTK National team boss Pavel Vrba will on Tuesday announce his squad for next month’s Euro 2016 qualifiers at home to Kazakhstan and away at Latvia. With none of the leading strikers abroad appearing for their clubs at present, there is speculation that Vrba may call up other Czech league forwards alongside Sparta’s David Lafata. Slavia’s Milan Škoda, for instance, has six goals in five games this term, while Roman Bednář, who is now with Příbram, has four.