In Sports News this Monday: Czechs take two golds at the Canoe Slalom World Championships; Czech men’s basketball team in with chance of reaching Olympics after historic EuroBasket finish; no change at top of football league; and Šafářová looks forward to return after release from hospital. 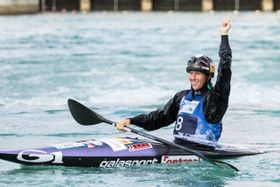 Kateřina Kudějová, photo: CTK The Czech Republic had a memorable Canoe Slalom World Championships at London’s Lee Valley, taking home two gold medals. Kateřina Kudějová was the first to top the podium after the 25-year-old came first in the women’s K1 category on Saturday. The following day it was the turn of her teammate Jiří Prskavec in the men’s equivalent event. The fresh-faced 22-year-old was all smiles after Sunday’s final.

“It’s an amazing feeling. I’m really pleased that I managed to cope with the fact I started in second-last position. It was extremely difficult, but the atmosphere was amazing. I managed to take risks in the race but also to stay in the running. So it was hard work but now I have the gold medal and I’m very glad that I do.” 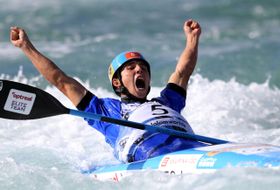 Jiří Prskavec, photo: CTK Two decades ago the slalom canoeist’s father Jiří Prskavec Sr. picked up a bronze medal at the World Champions at another English venue, Nottingham. And Jiří Jr. said his dad had played a big role in the Lee Valley success.

“He told me that he’d dreamt that I would win. I was aware of his success, and I’m glad that I’ve been able to build on it. It’s also a reward for him, as my trainer. He has trained two world slalom champions, Kateřina Kudějová yesterday and me today. It’s wonderful.”

Hats off to the Czech men’s basketball team, who have reached the qualification stage for next year’s Olympics in Rio. They secured a place in the qualifiers with a 97:70 win over Latvia on Friday to take seventh place at the EuroBasket championship, their highest ever placing.

No upsets in Czech top flight as top three all win 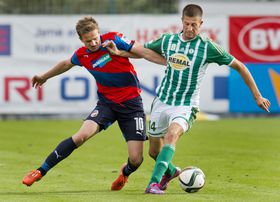 Bohemians 1905 - Viktoria Plzeň, photo: CTK The seventh round of the season in Czech soccer’s top flight was a good one for the bookmakers, being notably short on upsets. Leaders Sparta Prague beat Olomouc 4:0 in the capital, with two of those goals coming from midfielder Bořek Dočkal. Sparta remain two points ahead of Slovan Liberec, who dispatched Příbram 3:0 at home. Meanwhile, reigning champions Viktoria Plzeň continued their recent good run; their 1:0 win over Bohemians 1905 on the road keeps them in third and only three points behind the leaders. Karlovy Vary - Sparta Prague, photo: CTK Sparta Prague are also top of the domestic ice hockey Extraliga, though they were beaten for the first time this term on Sunday, going down 3:6 to Karlovy Vary. However, Sparta are one of just four teams on nine points with four rounds played. Liberec, Chomutov and Kometa Brno are the clubs breathing down their necks, after all of them notched up wins on Sunday.

Šafářová looking forward to return after release from hospital Lucie Šafářová, photo: David Kubíček Tennis player Lucie Šafářová has been released from hospital in Brno, where she spent a week receiving treatment for a bacterial infection. The world number five wrote on her Facebook page on Sunday that she was a lot better and hoping to get back on court soon. Šafářová also congratulated the Czech men’s team, who beat India 3:1 in a playoff in Delhi at the weekend to retain their place in the elite World Group in the Davis Cup.