In Sports News this Monday: Liberec win first Extraliga title in club’s history; Jágr’s Florida eliminated in NHL playoffs; and Viktoria Plzeň one point away from soccer league title with four rounds to go after win over Sparta in capital. 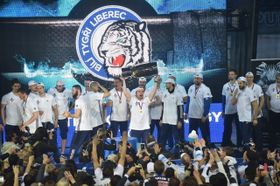 Photo: CTK Liberec have been crowned champions of the Czech ice hockey Extraliga for the first time in the club’s history after beating Sparta Prague 4:2 in the playoff finals.

The White Tigers sealed the historic success with a 2:1 victory at the capital’s O2 Arena on Sunday evening after Slovak forward Martin Bakoš struck the winner on 85:09 minutes in double-overtime.

Liberec had won the regular season with a record points tally and forward Petr Vampola says the club’s progressive coach Filip Pešán has been a major factor in their success.

“The whole team is behind it, from the first goaltender to the 25th and 26th players, who have been with us the whole season. Also our excellent back-up team, from the masseur on. But a great deal has been down to Filip Pešán, who has introduced lots of new ideas at the club. This can help the whole of Czech hockey move forward.”

“You can see how the players stick together. Of course, victory will bring us even closer together. People said Liberec didn’t have a crisis this season. We had a lot of crises, like every team, but the guys in the changing room managed to overcome them. This is their reward.” 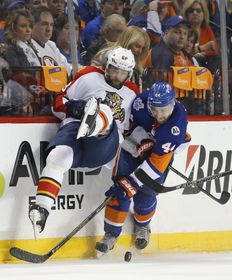 Jaromír Jágr (left), photo: CTK In the NHL Jaromír Jágr’s great season is over after the veteran Czech star saw his Florida Panthers eliminated in game six of their playoff series against New York Islanders. It was the 44-year-old’s 208th playoff game, putting him level on that score with Wayne Gretzky. However, it was also Jágr’s 37th successive playoff match without a goal.

Plzeň on brink of title after resounding win over Sparta Sparta Prague - Viktoria Plzeň, photo: CTK Viktoria Plzeň are just a single point away from lifting the domestic soccer league title with four rounds to go. The West Bohemians practically sealed the championship with a 3:0 defeat of second-placed Sparta Prague in the capital on Sunday, leaving their nearest rivals a full 11 points in their wake.

Though Sparta had reached the quarter-finals of the Europa League this season, there has been a fatal weakness in their league form: In seven of their nine games since the mid-season break they have conceded the first goal – a worse record than when they got relegated in 1975. Defender Martin Brabec says they have been unable to deal with opponents breaking at speed.

“I guess it’s not a coincidence. All the players are responsible. The last two times it happened, against Bohemians and Dukla, we were pressuring them in their half when they managed to break. We allowed them to get two-on-two or three-on-three against us – naturally this gives your opponents a greater chance of scoring.”

Plzeň can claim their fourth title in five seasons when they play host to relegation-bound Baník Ostrava next weekend.