In Sports News this Monday: the Czechs get off to a winning start in the ice hockey worlds; cross country skier Eva Vrabcová qualifies for the Rio Olympics; Sparta Prague secure second place in the football league; and in rowing Czechs are among the medals in a blustery Brandenburg. 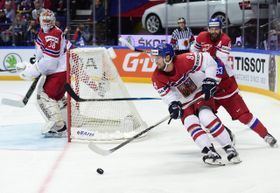 Czech Republic - Russia, photo: CTK We begin with ice hockey and the world championships being played in Russia. The Czechs team after two matches find themselves perhaps surprisingly are at the top of group A with five points. Most of those points were picked up with the championship curtain raiser against Russia and a 3:0 victory. But the Czechs then only beat Latvia on penalties. And they are not alone among the established ice hockey powers that are being embarrassed by the “minnows.”

Czech coach Vladimír Vůjtek says teams perceived as outsiders have a greater chance of creating upsets this time round because many of the top countries are without their NHL stars:

“It has a lot to do with the make up of the squads. The Russians still don’t have a complete squad. The Swedes as well didn’t get the players from the NHL that they expected. In that case they are playing against so-called weaker European teams that also have players in the Kontinental Hockey League or Swedish and Finnish leagues. The quality is similar.” 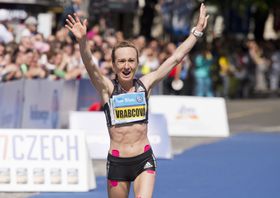 Eva Vrabcová, photo: CTK Eva Vrabcová was given a tumultuous reception on Sunday at Prague’s Marathon as she crossed the finishing line in just over 2 hours and 30 minutes. Vrabcová proved she is a woman for all seasons. She is perhaps better known as a cross country skier but on Sunday she set a new Czech women’s record for the Prague marathon and also qualified for this year’s Olympics in Rio with around five minutes to spare. She joins a handful of Czech women who has competed in both summer and winter Olympic games. 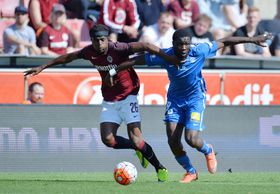 Sparta Prague - Liberec, photo: CTK In football, Viktoria Plzeň with the league title in the bag lost their 16 game winning streak with a 2:0 defeat to Mladá Boleslav. Sparta Prague secured second place and the chance of Champions League football next season with a 3:0 win against Liberec. At the other end of the table, Olomouc and Příbram slipped and look likeliest to be joining Ostrava in the second division next season.

And finally, in rowing and the European Championships in Brandenburg, Germany, the Czechs landed two bronze medals in windy conditions. World Champion Ondřej Synek won bronze in his first international start of the season. And in the women’s double skulls Lenka Antošová and Kristýna Fleissnerová got amongst the medals as well.