In Sports News this Monday: Kvitová’s resurgence continues with WTA Elite Trophy win – Fed Cup trainer hopes it will also help deliver fifth title in six years against France next weekend; Sparta fall further behind in title race as Dočkal sees red; and reasons to be cheerful despite defeat to Russians in Karjala Tournament. 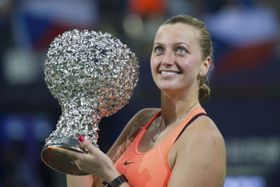 Petra Kvitová, photo: CTK Czech tennis player Petra Kvitová failed to make the WTA Finals this year following a turbulent first half of the season. However, the two-time Wimbledon winner began turning things around at the Olympic Games, where she won two bronze medals.

Now Kvitová has continued that resurgence by lifting the WTA’s second-tier Elite Trophy, which is for the players ranked 9th to 20th in the world. The 26-year-old took that title – which followed victory in the Wuhan Open – after beating Elina Svitolina of Ukraine 6-4 6-2 in Sunday’s final in Zhuhai, China.

And the world number 11 can end 2016 on a real high if she and her teammates manage to overcome France in the Fed Cup final in Strasbourg next weekend.

“It was a great success, winning those medals. Her performances were also good, and she beat some very good players. She didn’t make it to the Masters, but it’s a long season and it didn’t all go well from her perspective. But things have improved since Rio, and that’s great news for the Fed Cup. She will be very tired from all the travel and the change of time zone. But I know her and she will definitely be motivated for the weekend. She’ll give everything that she has left in the tank.”

Sparta fall further behind after Dočkal gets marching orders 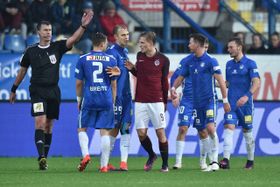 Bořek Dočkal gets a red card, photo: CTK In Czech soccer’s top flight Sparta Prague remain six points behind leaders Viktoria Plzeň, who have a game in hand, after a 0:0 away draw against Slovan Liberec at the weekend. Sparta didn’t manage one shot in that game after being forced to defend when they went down to 10 men. Midfielder Bořek Dočkal was the guilty party, receiving a red card after hitting an opponent in an off-the-ball incident. Sparta goalkeeper Tomáš Koubek had this to say after the match.

“We’ve fallen further behind in the race for the title. We did manage to defend and got a 0:0 draw with one man fewer. But we needed to win. It’s a pity. The red card definitely harmed the game from our perspective. We haven’t spoken to Bořek yet. He was sitting in the dressing room, but he didn’t say anything.”

Elsewhere second-placed Zlín beat Brno 2:1 and Slavia Prague, who are in third, drew 0:0 at home with Bohemians 1905 in the Vršovice derby. 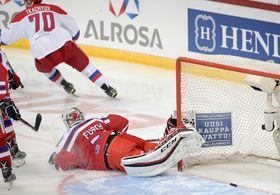 Czech Republic - Russia, photo: CTK The Czech Republic finished second in ice hockey’s Karjala Tournament after losing 3:0 to Russia in their final game on Sunday. However, many positives are being taken from the team’s attack-minded performances in Finland. The Czechs will have another chance to show progress under coach Josef Jandač in the next event in the Euro Hockey Tour, the Channel One Cup in Moscow in December.