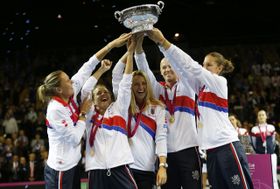 Lucie Hradecká, Barbora Strýcová, Petra Kvitová, Petr Pála, Karolína Plíšková, photo: CTK The Czech Republic confirmed their recent dominance of tennis’s Fed Cup at the weekend, beating France 3:2 in Strasbourg for their third title in a row and their fifth in six years. What’s more, they achieved their latest success in dramatic fashion, with Barbora Strýcová the heroine as the Czechs clawed their way back from 2:1 down on Sunday. The world number 20 first dispatched the hosts’ Alize Cornet 6-2 7-6 to set up an all-or-nothing doubles match. And in that decider she and Karolína Plíšková achieved a 7-5 7-5 victory over Caroline Garcia and Kiki Mladenovic, with Strýcová collapsing to her knees in joy after the winning point.

Plíšková, who has herself been the unexpected saviour of a Czech Fed Cup final in the past, pointed out that Strýcová hadn’t even known whether she would be sent onto the court in Strasbourg.

“She never knew, which made things harder. But Bára played an excellent singles match and then again in the doubles. We’ve played quite a few doubles matches together so we believed in one another. She’s a kind of motivator – she’s able to crank things up in the doubles. And if either of us has a weaker moment, the other one steps up. So far it’s worked out for us.” 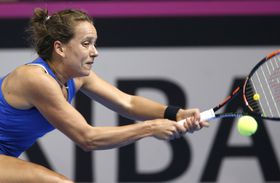 Barbora Strýcová, photo: CTK As for the woman of the weekend, Strýcová said her fourth Fed Cup medal was the sweetest to date.

“You never get tired of this. Victories, cups and medals never get old. Each one has its own special story. And for me this one in particular will be sweet for me, when I stop playing and look back at my career.” Michael Krmenčík (right), photo: CTK The Czech Republic’s footballers took their first three points in their campaign to reach the 2018 World Cup in Russia with a 2:1 victory over Norway in Prague on Friday night. And the hosts had newcomers to thank for keeping their qualification hopes alive. Viktoria Plzeň striker Michael Krmenčík found the net just 11 minutes into his international debut, before Jaromír Zmrhal of Slavia Prague doubled the scoring on only his second outing for the national team. That result leaves the Czech Republic on five points with four games played, two behind both Northern Ireland and Azerbaijan. Group leaders and favourites Germany have a maximum 12 points from 12.