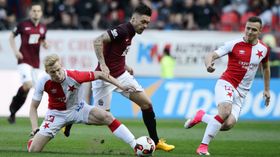 Slavia Prague - Sparta Prague, photo: CTK Slavia Prague were in the unusual position of being able to go top of the league at this late stage of the season if they triumphed over old foes Sparta at their Eden stadium. In the end, however, Slavia remained one point off top spot and were indeed hugely relieved to get out of Sunday’s encounter – one of the in one of the most anticipated Prague “S” derbies in some time – with a point from a 1:1 draw.

Both goals came late on, with Sparta’s Václav Kadlec opening the scoring in the 81st minute and the hosts’ Milan Škoda converting a penalty in the first minute of time added on.

The referee seemed to hesitate before awarding the spot kick and Sparta’s recently appointed manager Petr Rada questioned whether the correct decision had been made.

“I’ll tell you one thing. I played professional football for 20 years. I played for the national team. And for a referee to award a penalty in the 91st minute, he’s got to be one million percent sure he’s making the right decision. Otherwise, he shouldn’t blow his whistle. I need to watch it again and I don’t want to make any judgements. But to award a penalty in the 91st minute, in a derby, the ref’s got to be very experienced – and one million percent certain.” 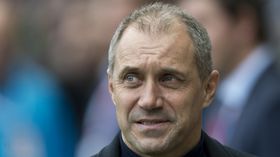 Roman Pivarník, photo: CTK Slavia had had the opportunity to go top of the league after leaders Viktoria Plzeň drew 2:2 at home with Teplice on Saturday. It was the third time Plzeň had dropped points in seven league outings since the start of the second half of the season and it proved the last straw for the club’s bosses, who sacked manager Roman Pivarník following the game. The reigning Czech champions will now be helmed by Pivarník’s former assistant Zdeněk Bečka in tandem with Pavel Horváth, who was for some years a talismanic midfielder for the West Bohemians. Patrik Eliáš, photo: CTK The retirement of Patrik Eliáš, one of the greatest Czech players ice hockey players, has been confirmed. The two-time Stanley Cup winning left-wing underwent knee surgery last May and was hoping to make a comeback to the NHL. However, his club New Jersey Devils announced on their website that the 40-year-old would not be returning to the ice. Eliáš spent his entire 21-year NHL career with the Devils and is the second most productive Czech player in the history of the league after Jaromír Jágr. He made 40 appearances for the Czech Republic and captained the national team at the 2010 Winter Olympics.