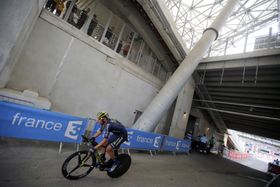 Roman Kreuziger, photo: CTK The best of the Czech competitors in this year’s Tour de France, which reached a climax in Paris on Sunday, was Roman Kreuziger. The 31-year-old finished 24th overall. While that may not seem like a great result, cycling is of course a team sport and Kreuziger told Czech Radio that he was very pleased with the success of his Orica-Scott stablemate Simon Yates. The Englishman achieved a seventh-place finish and was the best-placed rider under 25 in this year’s edition of the world’s most important cycling race.

“If I were to evaluate this year’s Tour, then as regards the team I am satisfied. Because Simon Yates finished in the top 10 and he also took the white jersey – those were our goals and we achieved them, so the satisfaction is complete for my part. Maybe we lacked a stage victory from a breakaway… that just didn’t work out. But I think all in all satisfaction prevails.”

The favourites Jaroslav Kulhavý and Kateřina Nash came first in the national cross country cycling championships in Brno on Sunday. By coincidence, both lifted the Czech title for the sixth time. However, Nash, who is now aged 39, was making her first appearance in the competition for seven years. 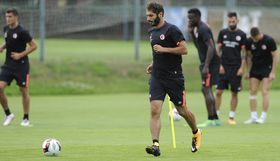 Slavia Prague, photo: CTK The reigning Czech titleholders Slavia Prague will be in action on Tuesday night, when they welcome BATE Borisov to their Eden ground for the first leg of their third qualifying round tie for football’s Champions League. The second leg takes place in Belarus on Tuesday week. BATE have reached the group stage of the prestigious competition five times in the last decade. 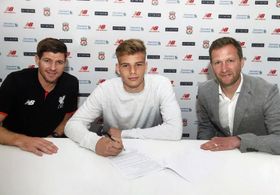 Vítězslav Jaroš, photo: CTK Sixteen-year-old Czech goalkeeper Vítězslav Jaroš has just left Slavia for one of the biggest names in world football, Liverpool. Jaroš will be trained by none other than Liverpool icon Steven Gerrard, who is now managing the club’s under 18s. 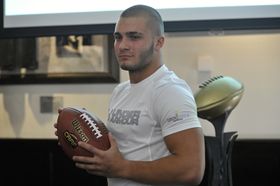 Ostrava Steelers' Dominik Dvorský, photo: CTK The final of the Czech Bowl in American football will take place at the ground of Viktoria Žižkov soccer club in Prague on Monday evening, after the recording of our programme. The final pits the Prague Black Panthers, who have dominated the competition for the last five years, against the Ostrava Steelers. The latter were the worst team in the league last season but have improved greatly and will be hoping to win the Czech Bowl for the second time in their history after a gap of two decades. Indeed, the Steelers are the only non-Prague American football club ever to have lifted the trophy.