Zbrojovka Brno - Sparta Prague, photo: CTK There was no change at the top of the Czech football league at the weekend, with the top three all winning. But while Viktoria Plzeň, Slavia Prague and Slovan Liberec were all picking up maximum points, their putative title rivals Sparta Prague were humiliated on Saturday in a 2:0 away defeat by Brno, who went into the fifth round at the foot of the table and had a man sent off after 67 minutes. Sparta forward Josef Šural had no argument with the outcome.

“In this weather and on this pitch we weren’t able to play quickly, as we had hoped to do. We failed to move the ball and we weren’t dangerous. We had a few crosses – but too few. We played slowly. It just didn’t go right and we had very few chances.”

Though only their first league loss, the weekend’s result leaves Sparta already seven points behind leaders Plzeň. Given their failure to reach the Europa League and rumours of player disquiet, the pressure is likely to be intensifying on Italian coach Andrea Stramaccioni.

The Czech national team gathered in Prague on Monday ahead of two World Cup qualifiers. Karel Jarolím’s men will face Germany at home on Friday and Northern Ireland away next Monday in a bid to reach Russia next year. However, holders Germany are on maximum points and the Czechs’ only real hope is to overhaul Northern Ireland, who they trail by four points, and try to reach the competition from second place. 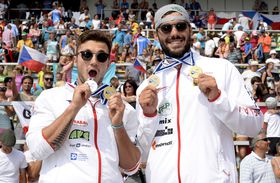 Martin Fuksa, Josef Dostál, photo: CTK It was a euphoric finale for Czech canoeing fans when the country took two gold medals in quick succession at the Canoe Sprint World Championships at the “home” venue of Račice, north Bohemia on Sunday. Josef Dostál shook off the disappointment of finishing third in the 1,000 metres the previous day to triumph in the K1 500 metres category before just minutes later the Czechs lifted a second gold through Martin Fuksa in the C1 500 metres. Other medals for the hosts included one silver and two bronze.

The Czech Republic’s Jan Kopecký won his sixth outright victory in the Barum Czech Rally Zlín on Sunday. That result extended the Škoda Motorsport driver’s unbeaten run on home territory to no fewer than 17 events. It was also three wins in three European Rally Championship starts for the former winner of the competition.

The greatest Czech volleyball player of the last century, Josef Musil, died on Saturday at the age of 85. Musil twice became world and European champion with Czechoslovakia and picked up Olympic silver in Tokyo in 1964 and bronze in Mexico City four years later.