Ester Ledecká stuns world with gold in super-G for greatest ever Czech success in downhill skiing; Czech medals tally in Pyeongchang up to six with bronze for Erbanová in speed skating 500m; Kvitová returns to top 10 with Qatar victory; and leaders Plzeň draw in first round after winter break. 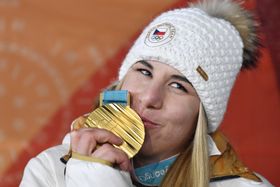 Ester Ledecká, photo: CTK Saturday will go down in history as one of the most remarkable days in the history of Czech sport after, against all expectations, the country’s Ester Ledecká claimed a shock gold medal in the super giant slalom at the Winter Olympics in Pyeongchang. Ledecká, whose main sport is snowboarding, stunned the skiing world by winning the event by a meer one hundredth of a second – and also stunned herself, going by now viral video shots of her slowly, disbelievingly realising she had won. The 22-year-old’s feat is the greatest Czech result in the history of downhill skiing. Not bad, considering she had never previously finished on the podium in an alpine event. What’s more, Ester Ledecká – who is the world champion – could grab a second gold medal in the snowboarding giant slalom on Thursday. That would be another jaw-dropping achievement, considering that no athlete has ever previously competed in both disciplines at an Olympics. 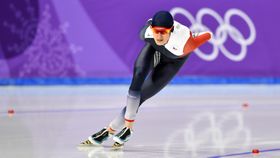 Martina Sáblíková, photo: CTK Ledecká’s wasn’t the only Czech Olympic success in recent days, with speed skater Martina Sáblíková adding to her extremely impressive medals haul with silver in the 5000 metres in Pyeongchang on Friday. Sáblíková has been suffering with injury problems and said that for her coming second was like a victory. With a career-total of six, the 30-year-old is in medals terms the most successful Czech winter Olympian of all time and – after passing out Emil Zátopek – is second only to Věra Čáslavská among all Czech Olympic athletes. 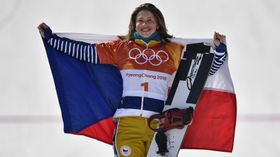 First ever Olympic medal for Erbanová in speed skating 500m

Sunday saw the Czech Republic’s medals tally climb to six so far when Karolína Erbanová earned bronze in the speed skating 500 metres. It was the first Olympic medal for Erbanová, who is 25. 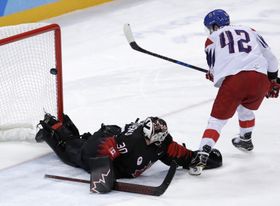 Petr Koukal (Czech Republic) scores past goalie Ben Scrivens (Canada), photo: CTK The Czech Republic’s ice hockey team notched up an impressive result against Canada on Saturday, winning 3-2 in a shootout. The Czechs had previously beaten the hosts South Korea, who put up a spirited performance, 2:1 in the hockey curtain raiser in Pyeongchang.

Kvitová back in top 10 for first time since horror attack

Petra Kvitová has returned to the world top 10 for the first time since a horrific knife attack at her home in late 2016 placed her career on the line. The 27-year-old is now 10th after beating Garbine Muguruza 3-6 6-3 6-4 on Sunday to pick up her second consecutive title at the Qatar Open. Olomouc - Viktoria Plzeň, photo: CTK Czech soccer’s top flight returned to action after the winter break at the weekend. Leaders Viktoria Plzeň drew 0:0 away with second-placed Olomouc and remain a full 14 points ahead with 13 rounds to go. Slavia Prague, who are third, were beaten 1:0 by Jihlava and Sparta, fourth, overcame Liberec 2:0 with the league’s record signing, Nicolae Stanciu, marking his first appearance for the Prague side with a goal.