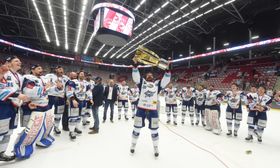 Photo: CTK Kometa Brno are the champions of the domestic ice hockey Extraliga. They beat Třinec 4:1 away on Saturday for a 4:1 victory on games in the best-of-seven final series to lift their second Masaryk Cup in succession, sparking massive celebrations among Brno fans watching the game in a square in the Moravian capital. It was the first time in over a decade that any club had retained the trophy and also saw Kometa set a new record of 13 Extraliga titles overall. Just as last year, Brno had hovered around the cut-off for an automatic place in the playoffs during the regular season but came good at the exact right moment and – just as in 2017 – lost a mere two games in the knockout stages. 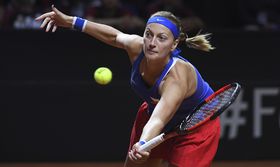 Petra Kvitová, photo: CTK The Czech women’s team will be aiming to make it six Fed Cup triumphs in just eight years after defeating Germany in the semi-finals in Stuttgart at the weekend. The Czechs were 2:0 up after the first day and – never having let such a lead slip – sealed progress on Sunday when an in-form Petra Kvitová beat Angelique Kerber 6-2 6-2 in just under an hour to give them an unassailable 3-1 lead on matches. Kvitová, Karolína Plíšková and co. will now be hoping to make home advantage pay when they take on the United States in the final in Prague on the second weekend of November. The Czech non-playing captain Petr Pála said on Sunday that he was excited about the possibility of Serena Williams lining up in the final, describing the American as the greatest female player of all time. Brno - Viktoria Plzeň, photo: CTK After a few shaky weeks, Viktoria Plzeň have boosted their chances of lifting the Czech football league title. The West Bohemians, who had taken only two points in their previous four outings, grabbed all three on Saturday when they overcame Brno 3:1 on the road. Just as valuable from Plzeň’s perspective were the two points second-placed Slavia Prague dropped in a 0:0 draw at Slovan Liberec. Those results leave Plzeň seven points in front with five rounds remaining. 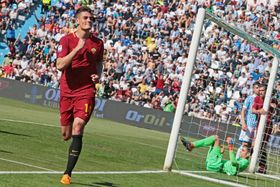 Patrick Schick, photo: CTK Patrick Schick has finally found the net in a league game for Roma, in his 18th league appearance since joining the Italian club last summer. The 22-year-old scored the third with a header as Roma overcame SPAL 3:0 on Saturday. Czech fans will be hoping the rangy forward makes the starting 11 when Roma face Liverpool at Anfield in the Champions League semi-finals first leg on Tuesday.