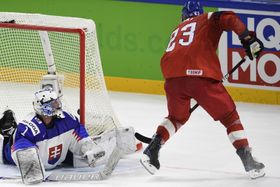 Dmitrij Jaškin made it 3:2 to the Czech Republic, photo: ČTK The Czech Republic’s ice hockey players have got off to a mixed start at the World Championships in Denmark. While the Czechs overcame Slovakia in their opening Group A game on Saturday evening, they did leave it rather late. Indeed, coach Josef Jandač’s men were trailing 1:2 with just 10 seconds to go in the third period when Martin Nečas forced overtime with his first international goal. Dmitrij Jaškin (who is of Russian origin) then made it 3:2 to the Czech Republic on 62:09.

In their second game on Sunday the Czechs lost 3:2 to one of the favourites at the worlds, Sweden. However, they gave a better account of themselves than in the opener, at one point cancelling out a two-goal deficit through Filip Hronek and Tomáš Hyka. The Czechs’ next game is against Switzerland on Tuesday. 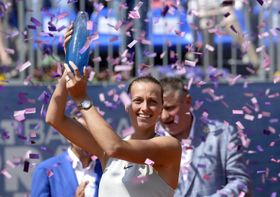 Petra Kvitová, photo: ČTK Petra Kvitová won tennis’s Prague Open at the weekend for her 23rd WTA title. The 28-year-old came from behind to beat Mihaela Buzarnescu of Romania 4-6 6-2 6-3 in Saturday’s final, so becoming the third Czech winner in the four years of the tournament. Kvitová later described the trophy as “one of the most emotional” of her career. 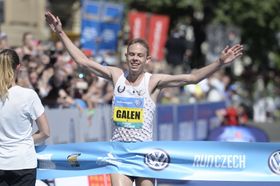 Galen Rupp, photo: ČTK Galen Rupp of the United States won the 24th Prague Marathon on Sunday. His time of 2:06:07 was the second best ever in the popular event, which drew thousands to the streets of the capital. Rupp was the first American to win.

Champagne on ice as Slavia beat Plzeň in capital Slavia Prague - Viktoria Plzeň, photo: ČTK The race for the Czech football league championship continues after leaders Viktoria Plzeň missed the chance to secure their third title in four years at the weekend. Even a draw against second-placed Slavia Prague would have been enough for the West Bohemians. However, Slavia kept their slim hopes alive with a 2:0 victory in the capital. With three rounds to go Plzeň are six points ahead. 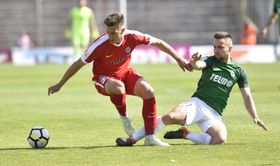 Brno - Jablonec, photo: ČTK At the other end of the table things are looking grim for Brno. Their 3:0 home defeat against Jablonec leaves them six points from safety. Just above them, tied on points, are Baník Ostrava and their near neighbours Karviná. Ostrava – just above the drop thanks to goal difference – blew the chance to give themselves some breathing space when Milan Baroš missed a penalty in their 0:0 draw with Mladá Boleslav.

The Czech striker Matěj Vydra has picked up a major personal honour with the golden boot for most goals in England’s Championship. The 26-year-old found the net 21 times this term for Derby County, helping to fire them into the playoffs for the Premier League.