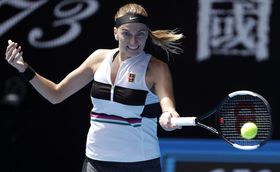 Kvitová was the first of the pair through to week two after an emphatic 6-2 6-1 victory over US teenager Amanda Anisimova on Sunday.

The two-time Wimbledon winner, who is seeded eighth in Melbourne, was all smiles when she spoke at a news conference after that match.

“Since this tournament began I’ve played what I really needed. I’m serving very well and I’m moving well. Sometimes when I’m nervous I’m quite tired and nothing really works. But this time I feel good and I’m really enjoying being on the court. I’m very happy to be in the quarter-finals again after a while.” 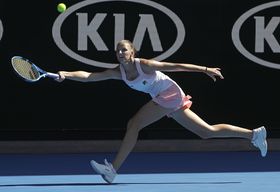 Karolína Plíšková, photo: ČTK / AP Photo / Mark Schiefelbein Seventh seed Karolína Plíšková reached the quarter-finals in the Australian Open after beating Garbina Muguaruza of Spain 6-3 6-1 on Monday. It is her third time in a row to get that far in the competition. The 26-year-old spoke to the tournament’s TV station on the court afterwards.

“I feel better with every match that I’ve played here. It’s my first time here at the Margaret Court [Arena]. It’s my favourite court here so I’m happy that I could do it here. I think I played well. Obviously the first set, where we had very close games, was very important. The beginning was a little bit nervous from both. It’s a little bit windy here, so the conditions are tricky sometimes – and with the shadows too. I’m just happy that I’m through.”

Plíšková and Kvitová have both reached the quarter-finals of a Grand Slam tournament for the first time since the US Open in 2017. Plíšková will now face Serena Williams for a place in the semi-finals, while Kvitová will take on Ashleigh Barty.

Siniaková and Krejčíková also into last eight Down Under

Also into the last eight in the Australian Open are two Czech doubles pairings: Kateřina Siniaková and Barbora Krejčíková, and Markéta Vondroušová and Barbora Strýcová. 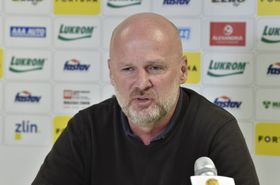 Michal Bílek, photo: ČTK / Dalibor Glück Former Czech national soccer team manager Michal Bílek is reportedly leaving Zlín, three weeks before the start of the spring part of the season. Bílek, who has taken Zlín to an impressive sixth in the top flight table, has accepted a lucrative offer to manage Kazakhstan, media in the country reported.

Tetteh reported to have joined Galatasary from Sparta Prague

Meanwhile outlets in Turkey are saying that Benajamin Tetteh is leaving Sparta Prague for Galatasaray. The Ghanaian striker, who is 21, had reportedly been in the sights of some English Premier League clubs.