Tomáš Chorý, photo: ČTK / Miroslav Chaloupka The race for the title in Czech soccer’s First League has been well and truly reignited. Slavia Prague stood to go a full nine points clear at the top with only nine rounds remaining if they secured victory at second-placed Viktoria Plzeň on Sunday evening. And for the first time in almost eight years, the bookies were not making Plzeň favourites for a game at their Štruncovy sady ground.

However, the defending champions were not going to give up the title without a fight and opened the scoring just before half-time, when a close-range volley from Tomáš Chorý was upheld by VAR.

Slavia, who had scored in every previous round this season, failed to respond after the interval and Frenchman Jean-David Beauguel earned the hosts a 2:0 victory with eight minutes remaining.

Plzeň coach Pavel Vrba had this to say after what may prove one of the key games of the season. 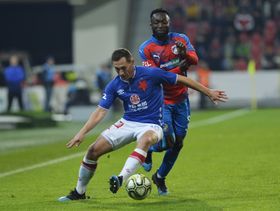 Viktoria Plzeň - Slavia Prague (Jan Bořil and Joel Kayamba), photo: ČTK / Michaela Říhová “I’m mainly glad that we have closed the gap on Slavia to three points. After this number of rounds, it’s important that we’re still in the fight. Now it could come down to one game in terms of points, and anything is possible. It’s far more pleasant to be still in the fight than somewhere in the distance.”

“We’re still in the lead. Of course we wanted to take the three points, but we just played badly. We’re aware of that. We were second to every ball, didn’t create any real chances and couldn’t have won this match.”

Weekend to forget for Czech keepers in top European leagues

It wasn’t a great weekend for Czech goalkeepers in Europe’s top leagues. Veteran Jaroslav Drobný made his first Bundesliga appearance for Dusseldorf since moving to the club but conceded twice in a 2:0 defeat at Leverkusen.

And in Spain’s La Liga Tomáš Vaclík let in three in a 3:0 defeat for fourth-placed Sevilla at Villareal.

This time last year Ester Ledecká became world famous after winning Olympic gold in Pyeongchang in both the parallel giant slalom in the snowboard competition and super G in alpine skiing.

On Saturday the 23-year-old enjoyed another triumph at the venue of her greatest success in South Korea, when she took her career 17th World Cup gold in parallel giant slalom.

The next day she followed that up with bronze in the same discipline in Pyeongchang. Ledecká is second in the overall World Cup standings.