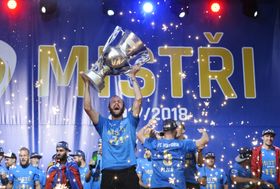 Roman Hubník, photo: ČTK/Chaloupka Miroslav Viktoria Plzeň have been crowned Czech football league champions for the fifth time in only seven years. Not bad considering they’d never won the title at all prior to 2011.

The West Bohemians raced ahead of the pack in the first half of the season only to see their massive lead shrink in the second. However, they in the end won the championship after beating Teplice 2:1 at home and seeing second-placed Slavia Prague lose 3:1 to Jablonec in the capital at the weekend.

Plzeň captain Roman Hubník had this to say amid the celebrations at the club’s Štruncovy sady stadium.

“I’m glad that we managed it and that we took the final step at home. I’m glad we’ll be able to enjoy it and I’m sure we’ll spend the whole night partying with our fans. It’s the happiest day of the year.”

At the other end of the table, Brno have been relegated after drawing 0:0 with Jihlava. The second club to go down will become clear in the final round next Saturday. 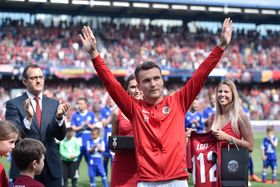 David Lafata, photo: ČTK/Petrášek Radek Striker David Lafata bid an emotional farewell to Sparta Prague’s fans when he turned out for the very last time at the club’s Letná stadium at the weekend. The six-time highest scorer in the Czech league, and all-time top scorer, has hung up his boots at the age of 36. Speaking after Sparta’s 1:0 win over Olomouc, Lafata said it’d been hard to keep his mind on the game.

“Naturally it was going through my mind all week but I guess it’s hard to prepare for a situation like this. I must admit it was hard to concentrate on the football because I was really emotional. The atmosphere and the crowd were fantastic. I couldn’t really focus but I’m glad we won the game.” 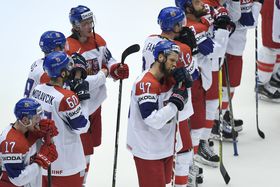 Czech hockey team, photo: ČTK/Deml Ondřej Following the Czech Republic’s early exit in the World Ice Hockey Championships the country has fallen from fifth to sixth in the IIHF rankings. Coach Josef Jandač quit last week after the Czechs were knocked out in the quarter-finals by the US.