For first-time visitors the world-famous Konopiste Chateau or Karlstejn Castle are natural choices for daytrips outside of Prague but one destination visitors might want to consider is the royal Czech town of Rakovnik, a veritable historic gem found less than 60 kilometres west of the Czech capital. Archaeologists have found that long before it was established as a town, the site of Rakovnik and its surroundings, was favoured by tribes as far back as the Stone Age. Finds on display at the local TG Masaryk Museum in Rakovnik show some of the oldest flint weapons and stone tools, and the museum gradually maps the evolution of Rakovnik and its hilly and wooded surroundings down through the ages.

Archaeologist Katerina Blazkova - who has worked at the museum for five years and is herself a Rakovnik native - told me a bit about the area's ancient past:

"The earliest archaeological indicators from this region date to the Middle Palaeolithic period some 250,000 years before Christ, when people lived above stream valleys and gathered plants and hunting big game and we have a lot of finds from that time for example near the village of Mutejovice. There are also very interesting finds from the Middle Bronze Age, like a hoard of bronze objects as well as rolls in gold wire, and they were put in a ceramic pot along with other objects. It might have been somebody's treasure."

Photographs at the museum reveal some of the idyllic groves, fields, and areas near river banks where archaeologists made finds, and slowly we move down through the centuries. Like many parts of the Czech lands, the Rakovnik region was later also home to the Celts and one of the region's most famous discoveries dates back to their time: a princely grave that included uncovering gilded jewellery, weapons, and surviving pieces of a horse's harness and parts of a two-wheeled chariot.

"It's very rare and we're really very proud: it's the only find of its kind in our region. There are only some 80 such graves in the whole Czech Republic." 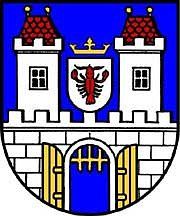 But what about Rakovnik's more recent history? Numerous Czech legends describe the eventual colonisation of the area by the Slavs and describe how the town got its name. The root of its name is "rak" - which is crawdad or crayfish. One legend has it that eating crayfish - previously thought to be poisonous - helped a widow and her children survive famine, which led to the town's eventual name. Crayfish are reportedly abundant in the area to this day, and the motif remains popular. One local, for example, told me it was a saying in his family that those who stayed in Rakovnik rather than moving elsewhere, did so because they were held back by a crayfish "clinging to their shirt tails".

Certainly the animal features famously to this day in the town's coat-of-arms - dating from 1482.

In 1588, Rakovnik was named a royal town by the Habsburg Emperor Rudolf II. In the decades before the Battle of White Mountain and the start of the Thirty Years' War, the town prospered, becoming famous for its market but especially for its beer. Archaeologist Katerina Blazkova again: Hus square, photo: Miloš Turek "In the end of the 15th century there were about fifteen brewers in the centre of the town. It's possible to say that every rich citizen had their own brewery in their home. Last year we excavated one house on the square and found a six metre deep well and we can say that it belonged to a house with a brewery. Rakovnik beer was really delicious in the late 15th century and Prague citizens - according to records - were very upset because Rakovnik beer was better than theirs!"

As Katerina Blazkova notes, most burghers' homes were built on the town's magnificent Hus square: 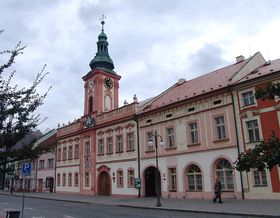 Town Hall, photo: Miloš Turek "The 16th century was really a very rich period for Rakovnik as a whole. At that time, the town walls - made of stone - were built. The square is the second largest in the Czech Republic, about half a kilometre in length and I think it's one of the most beautiful. You can spend there the whole afternoon and you can visit a lot of historic houses and buildings." 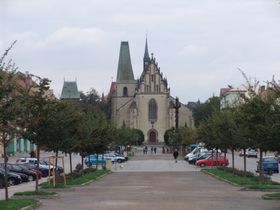 Church of St Bartholomew, photo: Miloš Turek The square is truly impressive and on it you'll find the Gothic Church of St Bartholomew, as well as the burghers' houses with Baroque facades from the 16th and 17th centuries. On the other hand, it has to be said that some views of the town are somewhat marred by more modern buildings and in the distance, a number of smoke-belching factories. But, somehow I found even that strangely intriguing, an eclectic mix between the new and old. In terms of tourism, Rakovnik - located near famous forests around Krivoklat - offers ample opportunities for active vacationers: well-marked cycling trails. Milena Krikavova heads the town's information centre: Kounov rows of the stones, photo: Archive of Radio Prague "I think it's a shame when tourists come to Rakovnik for only a few hours. There's a lot to see and do. The nearby countryside is beautiful, a little hilly but great for trips. No matter which direction you go there is something to see. There are areas known for mushroom-picking and if you head for Poddžbánsko you can see these ancient mystical stones from the 13th or 14th century. No one really knows what they were for: whether they separated fields, were used as markers in races, or marked the passage of time."

To this day Rakovnik retains a quiet but fascinating "medieval" character, with all of its historic houses including the sgraffito Samson house in what was once a famous Jewish quarter, as well as original gate towers, and many side streets winding uphill. One person who knows Rakovnik perhaps better than most - but from a completely different perspective - is Milan Kivala - a local pilot who sometimes shows visitors Rakovnik, as well as the entire region, from above: 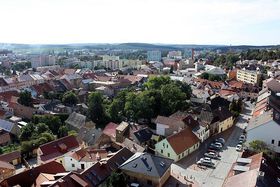 Rakovnik, photo: Kenha, CC BY-SA 3.0 Unported "Usually it's a Cessna which means travelling at about 200 km per hour about 300 metres above the ground, and that's still slow enough to notice different parts of the country. Of course, I like pointing out areas of Rakovnik or the Rakovnik region because I know some of the stories. For example, nearby is the area that was often the setting for stories by writer Ota Pavel. Otherwise, from above you can also see how Rakovnik has changed since 1989: for the most part reconstructed. You can see how the town has improved and changed for the better. "

For those spending more than a few days in the Czech Republic, Rakovnik is definitely worth a visit, especially if combined with Krivoklat Castle. If you've been looking for a path just a bit less travelled, Rakovnik and its surroundings may just be it.

Arriva to be fined for problems in Liberec region

Deutsche Bahn subsidiary Arriva, which secured a contract to operate four express rail lines in the Czech Republic, is to be fined…