It is often noted that the Czech Republic lies in the heart of Europe; what then lies at the heart of the Czech Republic? Well, there are pastures, woods and hills, a history of war and conquest, a strong musical heritage, excellent lager and a small town called Polička, where all of the above can be experienced.

Though most Czechs knows the name, some can be hard pressed to find Polička on a map. You have to say “near Litomyšl”, the nearest UNESCO site, or perhaps “halfway to Brno from Hradec Králové”. In any case, it’s in the middle of the country, as it has been for a long, long time. Here’s Karolína Zemanová of the municipal museum:

“The town of Polička was founded in 1265 by the Czech king Přemysl Otakar II because he wanted to defend the country on the border between Bohemia and Moravia. There was nothing here – just woods and a few villages – until he built this town. But life in Polička was very hard because the winters were long and hard and the summers were short and the farming period was very short so it was difficult for people to survive here. And there were also many fires here which destroyed the town and it had to be rebuilt. It would be okay for 50 years and then something strange, something terrible would happen to the inhabitants and so they would have to build it again. And it has been like this from 1265 until now.”

The history of Polička is one of being torn down, burnt down, sacked, starved and plagued. As one of the nine “dowry cities” of Czech queens it was an important prize for the Hussites. It was taken by Žižka in 1421, and sacked the same year by Hungarians under Sigismund. The 16th century brought major fires and plagues, and the 17th began with Polička burnt to the ground before the Thirty Years War broke out. That conflict saw the city captured three times by the Swedes in the course of six years, their first visit leaving plague, and their last leaving the town torn to shreds. It was caught in the middle between the Prussian and Austro-Hungarian armies in the First Silesian War and was badly damaged in the Second. And though Polička avoided the brunt of the Napoleonic Wars, it was hit by three outbreaks of cholera and three more punishing fires in the 19th century. By 1872 there were only four buildings standing.

Today, Polička’s troubled past is easily recalled through its dominant feature - the city walls that ring its centre. Local historian František Dubovský:

“The city walls are one of the city’s main attractions, because there are no fortifications of comparable dimensions anywhere in the Czech Republic, or really even in Central Europe. They come from the time of Charles IV, from the period around 1350, and they have been entirely preserved except for the gates. Parts of them have been reconstructed in gothic form for the beautiful backdrop they make, but it’s the preserved parts that are of interest for experts, because they developed constantly and were very extensive. There were earthen fortifications beyond the walls, a “pre-wall” between them, there was one then another water-filled moat around the bastions and a palisade at each line of defence. That made a protective system that was at least 50 metres wide, and the city could only be reached by drawbridges. Such a heavily fortified city was truly hard to capture.”

It isn’t hard luck that Polička is known for today though, quite the opposite. Modern Polička is a thriving cultural pearl of its region, particularly for its seemingly inexhaustible number of concerts and music festivals. And at least one factor in the town’s turn of fortune is its eminent son, Bohuslav Martinů. The world-class composer and darling of the American and French classical music scene in the 1930s to ‘50s is known in Polička simply as “Bohuš”, as it was here that he came from the humblest, and most unusual of beginnings: 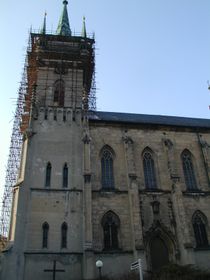 St. Jacob's church “I’m walking up the 192 steps to the top of the tower where Bohuslav Martinů was born and where he lived until he was 11-and-a-half years old – which sounds like a lot of years to be walking up so many steps but they say that for the first 6 years of his life he never came down.

‘This was the first stop for smokers and older people, because they’d get tired – it’s really tiring!’”

It’s strangely fitting that Bohuslav – whose name incidentally means “celebration of God” in Czech – would be born in a bell tower. One can imagine the organ, song and bells of masses and the purified sounds of the city all drifting up to the maestro’s boyhood home here in the sky. But for all its romanticism, life in a tower was every bit as tough and impractical as it sounds, as proud Poličkans Mr Dubovský and Petra Jílková showed me first hand.

“So this is the room where Bohuslav Martinů was born. His whole family was living here; there were about five people sleeping in this one room. His father was the fire watchman, so he was looking after the city, and when there was a fire at night he took out a red lantern, and in the day he had a special hammer to let people know there was a fire somewhere – can we ring it?”

It was Polička itself that sent the boy talent off on his career – quite literally: a collection was made to pay his way to a conservatoire in Prague in hopes of a prodigal return. And the investment paid off. Polička remained the soul of much of Bohuslav Martinů’s work until his death in 1959. His body was re-interred here and his gravestone can be seen from the room he was born in. Bohuslav Martinů's birthplace, photo: www.czechtourism.cz While it was Martinů who put Polička on the Czech cultural map, it’s the town’s masses of young people who keep it there today. Petra Jílková heads the cultural society Pontopolis, a group of locals who ensure a decidedly busy cultural calendar for Polička and the region.

“Every year there is a festival called 555 because this is the altitude of Polička, for teenagers especially you have Rockoupání, a very famous festival I’d say with 2 or 3,000 young people coming to visit Polička from the whole region, and many little festivals all over the city.”

What made you think a city of only 10,000 people would have such demand for such a busy cultural schedule?

“Because this is a really cultural city. People visit the concerts and go to the festivals held here. There are many cities all around Polička that are bigger and they don’t have the cultural life that we do. People like it here.”

One of the bastions of Poliča’s cultural life began 175 years ago and is still here today in the form of the Tyl Theatre Society. The group’s Jakub Kleinbauer told me its tale.

“The Tyl Theatre Society was established in Policka in 1834 and it’s still here today. The first performances were in 1819 though, when the actors who formed the club played in pubs, in the shooting club and in the town hall. They went on playing like that for a long time until 1929, when the Tyl House was built. The building was taken from us during communism, but after the revolution a part of it was returned, where we now have the Theatre Club, a venue for all kinds of theatre and cultural events.”

The “house”, by the way, is a slightly strange sight: a beautiful, large structure of strong 1920’s architectural purism that you don’t come across in many small towns. It sticks out with sloping red roofs that leave the first time visitor briefly wondering if he he’s in Polička or Japan. Inside are two spacious theatre stages and a pub, altogether offering the room to hold a largish concert, exhibitions, and a film screening at once. But the work of the Tyl Theatre Society is not limited to the great indoors.

“The wandering theatre is something really unique that was established by the head of the theatre society and some of his college classmates. Every summer we set out on foot across the local villages and play an original performance in each one. We have a stagecoach that has all the props in it and that the actors pull themselves from village to village until we get back to Polička. And so we go on like this for 5 or 6 days playing at the village pubs and cultural centres in the evenings, we have a few drinks of course, and it’s relaxing and fun for everyone I think.”

The wandering theatre will start this year in August, and end at the rock festival 555 in the town square. While that’s going on there’s Martinů Fest, celebrating the life’s work of Bohuš himself. September then starts with the Celebrations of Polička: a weekend of concerts of classical, Celtic and rock and roll music, photo exhibitions, theatre productions and fireworks. A lot to do in the heart of the heart of Europe. Bohuslav Martinů, Puppets, and the first masterpiece of a Czech maestro

Of the hundreds of works of the great modern Czech composer Bohuslav Martinů, one of his earliest and easiest pieces still shines through…

Encore: The appeal of the bell tower

In Encore we look at two recordings said to be inspired by church towers. It is well known that Bohuslav Martinu grew up in a room…