The picturesque town of Prostejov lies in Moravia's Hana region, near the town of Olomouc. Sitting on a key trade route connecting Europe's south with Europe's north, Prostejov has become an important centre of culture, trade, and industry. In a past edition of Spotlight, we took a tour of the town's National Theatre House; today, we find out more about Prostejov's history and take a brief look at some of the other places that are worth a visit.

"My name is Jana Gaborova and I am working at the Prostejov Town Hall and now we're standing in front of the town hall on Tomas Garrigue Masaryk Square. The town dates back to the twelfth century, before which it was only a small village. Then the development started and now it has about 47,000 inhabitants. This Town Hall was built in 1911-1914. The previous town hall, where the museum is now located, was built in romantic style. The current, so-called New Town Hall was built according to the plans of architect Hugo Kepka in the style called historicism."

Town Hall The new town hall was built in 1914 with a 45-metre tower. Before that time, the inhabitants of Prostejov had no real representative building. Prostejov was a Czech town in terms of inhabitants but the administration was in the hands of the Germans. So, when the Czechs took over the local authority, they wanted their town hall to stand out and be better than that of the Germans.

"What is interesting at the Town Hall? It has several interesting rooms that may be attractive to tourists. The most important room is the Big Ceremony Hall, which is now used for meetings of the municipality or wedding ceremonies. It is very beautifully decorated. Some 4.5 kg of gold were used to decorate the room, especially the ceiling. There is also an outstanding gallery of the mayors of Prostejov. This gallery is very popular but also rare in towns and cities in the Czech Republic. I don't know any other place which has such a gallery of mayors.

"Almost everything in the Prostejov Town Hall is still original and that is also why filmmakers use this building to shoot movies or serials. So, if anybody would like to come and visit our Prostejov Town Hall, you can find more information on our website or you can come and we can show you around."

Since you mentioned filming, what series was filmed here?

"The [Czech] detective series Cetnicke Humoresky, for example. I don't know whether it's popular abroad but it's very popular here and the actors and filmmakers have been coming to shoot here. So, we're looking forward to seeing it on television."

The old town hall now houses the museum, where Marie Dokoupilova told us more about the building and the town:

"The building that we're in now used to be the old town hall. It was built at the start of the fifteenth century. The basement, ground floor, and the first floor are still this old, but the second floor was added in the 19th century. The museum has only been in this building for around one hundred years. The first museum that came to being in Prostejov was in small spaces, and nobody knew that it existed. It wasn't until 1893 that the museum moved to a more suitable place inside Prostejov Castle. Then, in 1906, the museum finally moved here. Not only did this building once serve as the new town hall - it was also home to a district court."

Among the exhibitions on show at the museum are archaeological and ethnographic collections, a collection of glass objects, and caskets and chalices.

"We also have a large permanent exhibition of clocks. The collection was originally owned by the owner of a malt house. His name was Bruno Winter and he was of Jewish origin. For fear of persecution at the start of the Second World War, he donated his clocks to the museum. I think there are around 300 clocks in the collection."

Once home to one of the biggest Jewish communities in the Olomouc region, Prostejov has been dubbed the "Jerusalem of Hana". According to a 1930 census, there were 1,400 Jewish residents in Prostejov before the war. That number had risen to an estimated 1,650 in 1942, when the Nazis put the Jewish community on transports to Terezin. Only 84 residents of purely Jewish origin returned. Ten of them were children. Today, besides a few dilapidated buildings, there is little left to remind us of the legacy of the town's Jewish inhabitants, says Marie Dokoupilova:

New Synagogue "The Jewish community is believed to have been here since time immemorial, though in the mid-fifteenth century many more moved here, because the Jews were expelled from the royal towns at the time. They were allowed to settle around the church. This later became a thorn in the side of many Christian inhabitants. But the Jewish quarter stayed and it's actually still there to this day. However, since the WWII transportations, no one looked after the buildings and they became dilapidated. So, thirty or forty years later, they started to be torn down.

"What remained were two synagogues. Neither of them is in the ownership of the Jewish community now. One belongs to the Czechoslovak Hussite Church, which is using it as its own church; the other is owned by the Orthodox Church, which also bought the building after the War. Then there are a number of other buildings, of which the most interesting one is the so-called Ehrenstein House. It was owned and named after the first factory owner in Prostejov. He was so rich that he could afford to host royalty."

Prostejov Castle Prostejov was owned by a number of noble families. But the aristocrats that made the biggest mark on the town were the Pernstejn family, who had Prostejov Castle built in the early sixteenth century. They used the castle until they sold their estate to the Liechtenstein family at the end of the seventeenth century.

"The original appearance of this beautiful castle has unfortunately not been preserved. Archaeological research showed that its interior was decorated with frescoes and the courtyard was also decorated with arcades. Only a few pieces are still visible today, because the castle was destroyed at the end of the Thirty Years' War by the Swedish Army which occupied the town. Under the Pernstejn noble family the town's fortification was also built - some parts are also still visible today. But the gates that were the entrances to the town were destroyed by the Swedes. It is also important to note that the original Renaissance appearance of the castle changed at the start of the twentieth century, when the façade was decorated with sgraffito by painter Jan Kohler."

OP Prostejov Home to of one of the country's most famous textile companies, many Czechs today do not associate Prostejov with its castle, national theatre, or town hall but rather with the clothes industry.

"There are still numerous textile companies here but the most famous remains OP Prostejov, which has been renamed OP ProFashion. So the tradition prevails and I think many girls and boys from the region are learning this trade and we hope that this will continue."

We end today's Spotlight on a sad note. One of Prostejov's most famous inhabitants was the poet Jiri Wolker. He suffered a tragic fate, dying before he reached the age of 24. But in his short life, he managed to publish two collections of poems, three theatre plays, and also wrote fairy tales.

"Jiri Wolker was born here in Prostejov in 1900. He was multi-talented. He knew how to draw very well, played the piano and the violin, and even composed music. He got sick in the spring of 1923 and was diagnosed with tuberculosis. Since doctors advised him to get treated in the mountains, he spent half a year in the High Tatras. It first seemed to work but then his condition worsened and his mother took him back to Prostejov at Christmas. He stayed there until his death on the morning of January 3, 1924."

Here are a few lines from Jiri Wolker's funeral poem "At the Palmist's" - ironically, lines that could have been read at Jiri Wolker's own funeral:

This short line here means a short span of life
and your hand sir, is marked by a short line.
The gods have granted you but a short life
And soon you'll die. 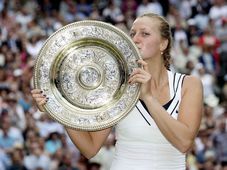 The brutal attack on Czech tennis star Petra Kvitová shocked not just the Czech Republic but the world. But in spite of an encouraging…

The house of culture in the Moravian town of Prostejov is one of the country's best examples of the art nouveau style. Built by the…