Týn above the Vltava, and under Temelín

A visit to Týn nad Vltavou offers much of what you would expect of a small South Bohemian town. The winding streets are full of locals in the morning, each one greeting the other, the buildings, mostly farmsteads, have a kind of rural hominess that whips up the nostalgia in you even if you’ve never been there before, the woods are full of aged artefacts - bridges and crosses in the middle of nowhere, say – and in the absence of any bustle you get the feeling that the church bell rings almost constantly.

One of the things that sets Týn apart though is that it has one of the longest histories of any habitation in the region. The very word “týn” itself is ancient, like the related English word “town”, its real meaning almost forgotten in everyday use, as Martina Sudová, the curator of the town museum told me as we walked through the enormous building that takes up almost one full side of the central square:

“The name ‘Týn’, in Old Czech ‘tejn’, means an enclosed, fortified space. So there was a wooden stronghold established here – the original týn – sometime in the early 11th century. In the late 13th century a castle was built on the site of the stronghold, and it too was called Týn.”

But the story of Týn goes much, much further back than its current name. Until the 1970s, every schoolchild learned that South Bohemia had been uninhabited until the coming of the Slavs. Týn was mentioned in 1229 in writing, and people had been living there for at least two hundred years before then. But in 1969 the local history books had to be rewritten, because archaeologists found another 6,000 years of human history nearby that they hadn’t imagined before. People had been living at this confluence of the Vltava and Lužnice rivers since time immemorial.

“We know for certain that the town came into being because there was a very important crossing of the Vltava river here; first a ford, and later a bridge. We know the bridge was here when Týn was first mentioned in the 13th century, and interestingly, it was the only bridge between Prague and České Budějovice until the 1700s. So thanks to the bridge the trade routes went through here, and the settlement could develop into a town. That’s also why the church here was originally dedicated to St Christopher, the patron saint of travellers and roads.”

Hence the practicality behind the founding of so many towns, including Prague: the right place to cross a big river. As Czech civilisation grew and flourished, so too did Týn nad Vltavou. 150 years after it’s first mention, in the late 1300s, it was a thriving little town, devouring the fruits of its trade route, with seven bakeries and 43 pubs. But Týn nad Vltavou, unlike Prague or České Budějovice, remained of such a size as to be bound entirely to the river in it’s name. In its thousand years of existence, only in the last 50 has it ceased to be a river town, and a centre for what was traditionally, always one of the most important industries specific to the Czech Republic’s special, landlocked typography:

“Timber rafting is something particular to this country, and it developed to its greatest possible extent here on the Vltava as opposed to anywhere else. The route from Týn to Prague along the river took three to four days, and the raftsmen who floated the wood there had to go back to Týn by foot, where they bound another raft and so on from spring until autumn. It was a very hard and dangerous profession, the river was wilder then, and the raftsmen had to be very capable to be able to get their cargo all the way to Prague. Even after the railroad until the last rafts left in the 1960s, rafting remained a traditional and nostalgic trade that belonged to the Vltava.”

With the onset of the railroad and the damming of the Vltava the way of life of every Bohemian town on every waterway was changed forever, and so was the wonderfully romantic appearance of Týn by the Vltava. The four mills that sat on the water’s edge are preserved only in old photographs, the ancient wooden bridge was replaced with a long steel truss, the old quarter that lined the bank was flooded and the dry land left became a park, and the very soul of the town changed for good. Martina Sudová again:

“The river here was truly beautiful. The oldest inhabitants remember most the weirs. People who remember the weirs say that the whole atmosphere of the town changed when there was suddenly silence, there had always been the constant rush of the water as it went over the three weirs.”

And the damming of the Vltava was not the last slight that modern progress had in store for Týn nad Vltavou – you’ll see what I mean from the road into town, miles before you get there. Hulking above of the landscape of rolling hills and dales and pristine farmland and visible from anywhere in the area are the four cooling towers of a nuclear power plant.

“The town was affected by the construction of Temelín primarily architecturally, a department store was built near the square, two reservoirs were built which caused the last mill to be destroyed, and a large prefab housing estate was made for the workers. The villages where the power plant stands were torn down and it was a great loss for the people who had always lived there. Two books have been written about their fates, and many of the older people who were unable to come to terms with their relocation to prefabs or elsewhere died a short time afterwards.”

That’s not to give the impression that the best of Týn nad Vltavou depends on history and a vivid imagination to be sure – and rest assured if you’re not into nuclear power plants, you can’t actually see it from the town centre itself. Once you’ve taken in all the lovely sites around town you can move on to the one beneath it: a series of impossibly tiny corridors that run from here to there beneath the square, older than anything above it and defying clear explanation.

“It’s pretty, but it’s hard going, as you can see from the entrance here. The corridors start with this little hole which the workers probably made as wide as their shoulders; it gets wider further down. There’s a labyrinth of medieval passages down here. Most Central Bohemian towns have them, they usually connected cellars, but what’s strange about these is that they don’t connect anything, there’s only a long, narrow and crooked passage through the rock and no one knows why. Some think they were mining for something, others think it was for water reserves, because there are two wells with very pure water.” 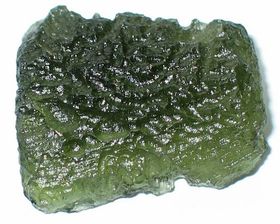 Moldavite And as for what lies under Týn nad Vltavou, it has another claim to fame in the form of thumb-sized lumps of green glass that were once strewn all over the area. Local lore had always assumed they were the litter of some former glassworks until the modern times, when 40,000 of them were collected in the area and proved to be unique to geology. They were called Vltavín, or Moldavite, and the museum in Týn has one of the largest collections.

“Moldavite was created 15 million years ago when a meteorite fell near what is now Stuttgart, where there is now a crater and the blast melted the material in the ground and blew the debris into Southern Bohemia, Southern Moravia and part of Austria, the only three locations where it can be found in the world. What fell on land degraded quickly, but the pieces that fell into lakes, which Southern Bohemia is full of, became Moldavite, with their beautiful and striking shapes.”

The best thing about Týn nad Vltavou would have to be quite simply the luxurious peace and quiet of an old provincial town, and ironically enough, it’s largely thanks to Temelín. The construction of the power plant gave Týn a qualified and busy workforce. There is little unemployment and less of all the woes that accompany the joblessness so prevalent in many other towns the size of Týn. 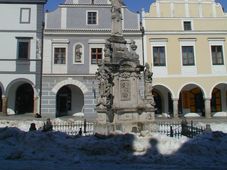 Třeboňsko nature reserve spans an area of 700 km2 in the far south of Bohemia. Lying east of the hilly terrain of the Šumava region,… 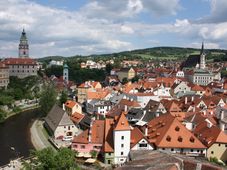 Český Krumlov - an island of unreality

Český Krumlov is a small town situated in the far south of Bohemia, about 25km from the city of České Budějovice. Bordering the Šumava… 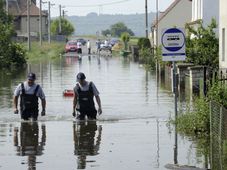 The weekend brought no respite for the thousands of people evacuated from their homes in last week’s devastating floods. Torrential…