In today’s Spotlight Radio Prague visits an early Baroque palace known as Michnův palác in the historic quarter of Malá strana. Built in the 16th century, it first belonged to the Michna family before it became munitions factory in the mid-1700s. In the early 20th century, after the founding of Czechoslovakia, it was sold to the patriotic Sokol sport and gymnastics organisation, which renovated it and named it Tyršův dům (or Tyrs’ House) after its main founder. 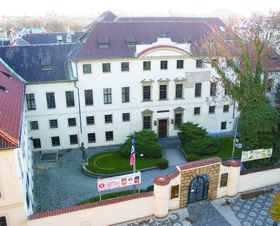 Tyršův dům If you’ve visited the Czech capital’s Malá strana there’s a good chance you’ve passed by Tyršův dům, a beautiful Baroque palace, together with surrounding grounds, which underwent massive renovation in the early 1920s, after it was bought by Czechoslovakia’s Sokol organization. Sokol (which means falcon) was a sports and gymnastics movement which had been founded roughly 60 years before by Miroslav Tyrš and Jindřich Fugner, and played a strong role in the Czech National Revival and later in the inter-war period. The movement’s central tenets were the balance of body and spirit, influenced by romantic or nationalist sports movements in fellow European countries and tracing inspiration back to Ancient Greece. It long sought a proper headquarters and Michnův palác would prove ideal.

Still, when it was bought by Sokol in 1920 the site was largely a ruin, having been used as a manufacturing site for munitions as well as a barracks for soldiers of the Austro-Hungarian Empire. Zdeněk Bartůněk, a retired professor from the Faculty of Physical Education, who has lived and worked on site since the mid-1960s told me more:

“When you look at photographs from the period and dig through the documentation, you see that the palace in the early 1920s was an absolute shambles. But within just a few years the site was fully renovated. The site cost 2.1 million Czechoslovak crowns and involved renovating not only existing buildings but adding on or tearing down some facilities. The completed site was reopened in 1925 and was attended by 15,000 Sokol members as well as Czechoslovakia’s first president, T.G. Masaryk.”

Renovation of the site was overseen by architect František Krásný and included a new complex to be used for exercise, including a basement pool which is open to the public and used by Charles University to this day. Meanwhile, a large building, coined Carré after the French word for square, was torn down to make room for athletics grounds. Carré had been used as a barracks and only photos remain. In the pictures - indeed in all photos taken prior to the renovation project - an anonymous man stands in the shadows holding a measuring stick. Zdeněk Bartůněk:

“In the photos you can see how they approached the project, creating a 1:100 scale model and each pictures reveals a man at the side holding a metre-long stick. At first my wife and I used to wonder who he was and what he was pointing at, (we thought it might be hidden treasure or some kind of secret) until we learned the truth: that he was there to show by proportion the size of the building.”

Today, it’s hard to imagine such a massive project being completed in Prague just a few years’ time, but by 1925 the building was ready for use, by both male and female Sokol members. There were on-site living quarters, a gym and even access onto the palace’s roof, where groups of sportsmen and women used to take in the sun. When he visited, President T.G. Masaryk - 75 at the time - also couldn’t resist.

“The president visited Tyršův dům on several occasions. He was in the habit of visiting key areas several days before he was due to speak, and here it was no different. He had a good look at the site before it was opened.”

A photo shows T.G.M. climbing up staring unflinchingly ahead. Naturally, I couldn’t pass up the chance for a look at the roof myself, climbing first stairs, then a ladder to the top.

“It’s an unusual view of the capital you can see the main sites – the Castle or the Devil’s Stream from a different angle. There’s one bridge over Čertovka, and another.”

Below, in the basement where the pool lies, the scene is quite different. Several dozen first-year students at Charles University do lap after strenuous lap. I talk to their instructor Karel Kovařovic:

“These are first-years and they are just warming up for dives today, so they’re working hard. The technique’s not there yet but they’re trying. In the first year we teach them the basics: in the second we teach them how to swim fast.”

The pool, used by the faculty during the week and the public at the weekend, operates at a loss but Sokol is able to pay for the operation of the headquarters through various means, including the commercial rental of space inside and accompanying buildings. Once again my guide Zdeněk Bartůněk:

“Along with Tyršův dům, Sokol owns the neighbouring Chotkův palace and buildings housing private hotels and rents space for commercial purposes. Because of that we are able to keep Tyršův dům in operation. The turn-over is around 40 million crowns per year and without it the headquarters would not be able to operate.”

Not surprisingly, Tyršův dům as the centre for Sokol in the Czech Republic, remains a key site during so called “slets” – athletics meetings between members from all around the world: other Slavic countries, North America, and elsewhere. Meetings are no longer what they used to be says Mr Bartůněk - in its heyday in Czechoslovakia alone the movement attracted tens of thousands in massive athletics displays and boasted more than a million members – but still visitors at the last “slet” in 2006 counted in the hundreds, if not thousands. Many expatriates from around the world still share the movement’s moral bearing and approach to mind and body.

Historically, the Sokol movement had a major impact not only on the founding of Czechoslovakia – but also in resisting tyranny in the Second World War. Both the Nazis, after they occupied Bohemia and Moravia - and the Communists who came to power after the war in 1948, were quick to identify it as a strongly patriotic and principled movement and therefore a threat. Zdeněk Bartůněk:

“The Nazis were very wary of Sokol as a strong movement and banned it. The Communists, a few years later, were also aware of its strength as an organisation. The latter, to a large degree appropriated it, replacing it with the spartakiáda – similar large displays of gymnastics. It was clever of them to funnel that display of strength for their own purposes. Spartakiáda continuing at Strahov stadium, which was the site of the last great ‘slet’.” 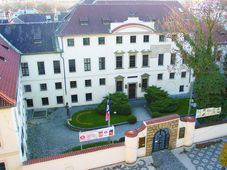