In this edition of Spotlight we visit Veltrusy Chateau, a gorgeous summer estate found north of the Czech capital. Founded in the 1700s by Czech nobleman Václav Antonín Chotek, Veltrusy is far from an obvious destination, but is well-worth a day-trip. The castle grounds boast a 300 hectare park along the Vltava River, with numerous paths leading among ancient trees to pavilions, a bridge or two and various monuments. Then of course, there is the chateau itself, highly valued as a gem of Baroque architecture. 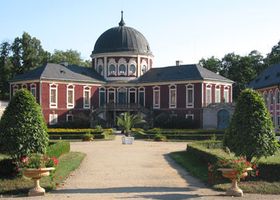 Veltrusy Chateau I asked Pavel Ecler, the castle’s custodian, how he would describe the perfect visit:

“On bike is a very good way to see the park; for now, you have to bring your own, but as of next year visitors will be able to borrow bikes on site. Currently we offer a guided tour in the saddle covering eight kilometres, in which visitors get to see some of the park’s most serene areas. It’s perfect for the morning. Then, a little later, I recommend settling down somewhere on the grounds for a picnic, followed by a tour of the chateau itself.”

Veltrusy Chateau The summer palace has a remarkable history – one tied, in good times and bad - to the river which surrounds it. Flooding in the 18th century created a branch of the Vltava River which separated the grounds into an area of land locally referred to simply as Ostrov (Island). That was the location Václav Antonín Chotek chose for the noble family’s summer seat, a stately palace that was built to impress: its founder held a trade exhibition there after it was built, which was attended by none other than the Holy Roman Empress Maria Theresa. Pavel Ecler, again:

Veltrusy Chateau “That was of course a huge honour and an important event. Ahead of her visit the chateau and park were broadened in order to house a larger number of guests, and to this day local legends tell of areas in the park she visited, including one pavilion on the grounds where she supposedly stopped to rest. The story has one catch: the pavilion was built some 40 years after her death! But locals like to say, ‘I bet she saw this or that’. In short, anything ‘important’, she must have visited!”

Otherwise, the site was a favourite hunting ground for the nobility. There was a pheasantry, no longer in existence, and a game keeper’s lodge. Today, the grounds are home to a fallow deer park and its visitors most often describe the area is something of an oasis. The reason? Veltrusy lies hidden just a few short kilometres from a heavy industrial landscape, an area blighted by frequented roads, chimney stacks and numerous factories.

In all honesty, arrival at the chateau itself is a welcome relief.

Veltrusy Chateau “Those of us who work or live around here call it an oasis, an island in the middle of an otherwise industrial landscape: not only is there the rubber manufacturing factory in nearby Kralupy, there is also the Neratovice chemicals plant, as well as sand quarries in the area that all have an impact. Veltrusy is an island in an industrial sea.”

Six years ago, in 2002, Veltrusy Chateau faced a threat of a different sort: like many notable sites in the Czech Republic the historic building and its park were devastated when massive floods hit the country. Like parts of the capital, Veltrusy, on the river’s edge, was swamped.

The floods in 2002 “2002 was the year that changed everything: Veltrusy, like so many areas, was devastated by the floods. Water destroyed a great part of the park spreading earth hundreds of hectares and bringing in sand, garbage and even unmarked barrels of industrial waste. The ecological damage took several years to clear up with the help of the Czech Army. At present there are still some hectares which have to be re-cultivated. As for the chateau: most of the important items, such as furniture and artwork, were saved in time, but not everything. The water spilled into ground-floor rooms and it took several years to dry the rooms out properly, to prevent the palace from being damaged permanently.”

The floods in 2002 Veltrusy was completely closed to the public as technology was brought in and repairs and renovation began – steps which cost tens of millions of Czech crowns. Today, the circle is practically complete: no damages in the park remain visible, and the few visible renovations still underway, helped by EU funding, are unrelated to the 2002 floods. But if flooding were to return, are new safeguards now be in place?

“What we saw in 2002 was unusual and drastic: even if this area has always seen flooding, this was incomparable, the country had never seen anything like it. Embankments in the area were strengthened and plans are still underway to further buffer the nearby town of Veltrusy. There won’t be safeguards only for the chateau and park but a new diversion dam will be built to protect both. The original one, 250 years old, will be left for historic reasons: we want to create a promenade for visitors along its length.”

Veltrusy Chateau Even after Veltrusy re-opened, its rich interiors remained mostly off-limits to visitors as original decorations and items were restored and repaired. But next year organizers would like to see most of its rooms reopened. One exhibition will show how the summer palace was restored, and organizers are hoping for a rise in visitors. As it stands now, the number of visitors to the park is impossible to gauge, but the number of those who visited the chateau these lean years was negligible, numbering only a few thousand. Organisers at the chateau hope that will now change: that more tourists will leave the beaten path in the future and choose Veltrusy Chateau as a spot for a perfect spring or summer’s day. 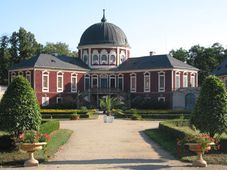 In this edition of Spotlight we visit Veltrusy Chateau, a gorgeous summer estate found north of the Czech capital. Founded in the 1700s…