Czech Radio’s Hit of the Century poll has reached the final. Since January listeners in the Czech Republic and elsewhere have been choosing from among the best songs released in the Czech lands from 1918 to the present day. Why does the “Czech century” begin in that year? It’s very simple. On 28 October 1918 Czechoslovakia declared its independence from the Austro-Hungarian monarchy. While Czechoslovakia as the common state of Czechs and Slovaks has ceased to exist, Czechs regard 1918 as the start of their modern statehood. Symbolically, a number of songs that made it into our selection of 100 most popular songs were duets performed by Czech and Slovak vocalists.

In the beginning there were 100 songs, with one song representing one year of the existence of the Czech Republic and Czechoslovakia. By voting Radio Prague’s listeners chose first 12 semi-finalists and now six (actually seven in the end) finalists. Separately, listeners of the station Czech Radio Dvojka have also been casting their own votes. Interestingly, there hasn’t been much overlap in the songs selected by Czech listeners of Dvojka and Radio Prague’s international listenership. Indeed, of the 12 most popular songs only half have appeared in the selections of the two stations’ listeners.

Which songs have reached the final for Radio Prague listeners?

Final voting concludes on Sunday July 1. We will announce the winning song on our website, www.radio.cz/en and in our radio broadcast on July 2.

A special concert will take place on Prague’s Old Town Square on October 28 at which the winner of Czech Radio Dvojka’s poll of songs will be revealed.

Ten participants drawn out of a hat will receive a CD from Radio Prague containing recordings of these best hits in a new arrangement; the CD is due to be released this coming October. 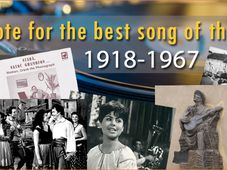