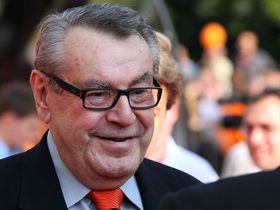 Miloš Forman, photo: Tomáš Adamec The Karlovy Vary International Film Festival on Friday paid tribute to the work of the late Czech film director Miloš Forman. Forman had a knack for making great movies, be it on a generous Hollywood budget or a skimpy one in communist Czechoslovakia, with censors on his back. And music was an indelible part of the film magic he weaved. His Oscar winning Amadeus sparked a massive interest in Mozart’s music among the broad public and the music in his earlier movies such as Audition, The Firemen’s Ball or Loves of a Blond helped create a realistic picture of life in communist Czechoslovakia in the 1950s and 1960s. Forman’s last movie Goya’s Ghosts was made in Spain in 2005. But he had yet another creative challenge to look forward to, returning to his old homeland to direct the jazz opera A Walk Worthwhile at the National Theatre in Prague on which he was able to work with his older twin sons Petr and Matěj. It was an experience that he later said he greatly treasured.