Last week United States President George W. Bush announced plans to modify his nation's visa waiver program to raise the number of countries whose citizens can enter the U.S. without a visa. The announcement was made during a trip to Estonia, and was received by Czechs with great interest, as the Czech Republic is one country that could stand to benefit from a change in U.S. visa policy. Because U.S. citizens are allowed to enter the Czech Republic for a short period without a visa, but Czechs are unable to do the same, it is an issue that festers at the core of bilateral relations between the two countries. 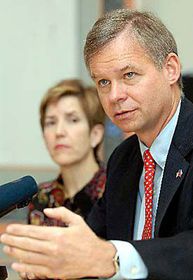 "Visas are a very big issue in the Czech Republic; it's probably the number one issue, and I've come to learn very quickly how big of an issue it is here," he said. "The president made a significant announcement today. He announced that he was willing to work with Congress to establish some flexibility in existing visa waiver law, to provide modifications to visa law that would focus on security. So it's a somewhat different focus than it's been in the past. There's a long way to go on this. Congress has to change the law. Of course, any time a law is changed in the United States that's a process; it's not something that happens instantly or overnight. But from the perspective of the Czechs, I think it has to be looked at as good news."

For now, U.S. citizens can travel to the Czech Republic for business or tourism for 90 days or less without obtaining a visa. Czech citizens must undergo what many say is a complicated and painful process to obtain a visa to enter the United States for any reason.

But Czech Foreign Minister Alexandr Vondra took President Bush's statement as a sign that the situation would change in the near future. On Czech TV after Bush's announcement Mr. Vondra projected a timeline of approximately two years to fully balance U.S.-Czech visa relations.

"It's basically a political statement, which casts light on the need to change the law," he said. "It's not a question of weeks or even months, but I think that one or two years would be a realistic estimate."

Ambassador Graber said a timeline for any visa change would be impossible to predict, so for now, Czechs have to pay and wait for the opportunity to travel to the U.S. United States President George W. Bush with Czech President Vaclav Klaus, photo: CTK The ambassador outlined America's position at a public meeting at Prague's Hotel Savoy. Among those in attendance was Lucie Stejskalova. She agrees that the visa issue is a top priority for strengthening the relations between the two countries.

"Czechs are complaining a lot about how much money they have to pay for the visa, and it's not sure whether they will receive them or not even if they pay," she said. "So they would like to at least know the reasons why they do not go. And of course everybody here would appreciate a lot if there was the no-visa traveling possibility to the U.S."

To apply for a visa to visit the States, Czech citizens must pay a processing 2,200 CZK, or the equivalent of approximately 104 USD, which is not returned if the application is rejected. Last year, the U.S. embassy in Prague granted 32,000 10-year visas to Czech citizens. More than 45,000 Czechs visited the U.S. in 2005.

Over the past few years, the rejection rate of applications for Czech visas has hovered around 10 percent. According to current U.S. policy visa rejections must stay below 3 percent for a two-year period for a country to qualify for the visa waiver program. 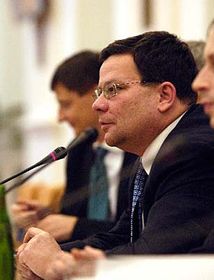 Czech Foreign Minister Alexandr Vondra, photo: CTK Jirka Brandys, a student who also attended the recent panel with Ambassador Graber, summed up some of the reasons he thinks the U.S. should allow Czechs to visit the country without visas.

"Our states cooperate a lot--they cooperate in the case of business, military and they support each other on the world scene," he said. "This can be seen for example in Afghanistan, the involvement of the Czech army in Iraq as well, and investments that flow from the U.S.A. to the Czech Republic. I can't say we have so many issues in this field - just the visa issue. Normally I think our relations are quite good."

The support the Czech Republic has lent to the U.S. in the military missions in Afghanistan and Iraq is a reason often cited as justification for a policy change, as well as the fact that the U.S. is considering the Czech Republic as a possible host site for a missile defense base. Throughout the year, U.S. defense experts have been scouting locations for the base in Poland and the Czech Republic.

"The United States is in the process of deciding whether to offer the possibility to host a missile defense facility in the Czech Republic," Ambassador Graber said. "There are a couple of components to it: an interceptor component and a radar component. It is possible that both interceptor and radar in one country or it could be divided, with radar in one country and interceptor in another. Again, that decision has not been made. If an offer is made to the Czechs, it's very important to stress, I believe, that the decision is ultimately a Czech decision as to whether or not to accept that offer. I believe that if an offer is made it would be a good thing for relations between the two countries...." Afghanistan, photo: CTK Some opinion polls have found that the majority of Czechs oppose the installation of a missile defense site. On the other hand, some people see the base as a good opportunity to strengthen the relationship between the two countries.

Ambassador Graber believes that the offer would be a positive development for security in both countries and security in the central and eastern regions of Europe. But some critics of the potential facility have said a missile defense base would make the host country a strategic target. There is also continued uncertainty about under whose jurisdiction the facility would lie. Would the United States, the Czech Republic of some international body be legally responsible for administration of the site? Czech lawyer Jana Hrstkova attended Harvard University Law School on a Fulbright scholarship.

"I think it's really important to be absolutely sure about terms and conditions," she said. "I'm a lawyer, so I know that it's really crucial to have an understanding of all technical and legal aspects. Even today, during the questions session, there was a specific question related to experience to different countries where bases exist, like in Japan and Germany. I think the majority of people actually do not really know what in reality it means, and how it would work. I think there needs to be a real dialogue, explanation and practice so that people can have a better understanding and they could form a better opinion about the situation."

Ambassador Graber says that these issues as well as the low opinion polls will need to be addressed, should the U.S. choose the Czech Republic as a host site.

"I think it would be important for both countries to have a dialogue on this and I'm convinced that if the full story is communicated that the Czechs will support, again, whatever offer might be made," he said.

The ambassador anticipates that a decision will be made this year.

In addition to addressing the well-publicized issues of visas and the missile defense facility, the U.S Embassy is trying to promote educational exchanges between the two nations and more investment in the Czech Republic by American companies.

"American investment is in the Czech Republic continues to increase," the ambassador said. "This has been a very favorable place to do business. I meet regularly with American businesses that are here. I plan to meet with Czech businesses that might have an interest in an American partner and the American marketplace."

Graber says this task is a challenging one at a time when the Czech economy is gaining strength and international businesses are looking further east for cheaper labor and more amenable legal and economic environments in which to do business.

"As this democracy matures, this will not be the low cost place to do business," he said. "A skilled, educated, motivated workforce will become really a competitive differentiator. So I think that's probably the most important thing. And I do think it's important, too, as I said before, to strengthen some of the institutions of democracy, making sure that there is a transparent legal system, making sure that business corruption is minimized. Things such as that are very, very important. Making sure there is a solid infrastructure. People and infrastructure are probably two of the most important things a business looks at when deciding to invest." 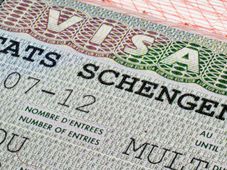