Czechs and the Russian Bear

In early July, three days after the Czech Republic and the Bush Administration signed a controversial agreement on a future anti-ballistic missile radar base, Russia drastically reduced the supply of oil flowing into the country. The move prompted fears that the Czech Republic had become the latest post-communist country to face what some view as extortion from its former big brother – one strongly opposed to the placement of the US radar base on Czech soil. The crisis soon passed, with Russian Prime Minister Vladimir Putin ordering a full restoration of supplies. Yet the incident underscored tension both above and beneath the surface between the Czech Republic and Russia – one which harks back to a painful 40 year experience as a Soviet satellite. Now, almost twenty years on, have those relations begun to heal, or do Czechs still remain bitter towards Russia? I hit the streets of Prague to gauge some opinions: 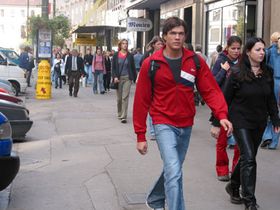 Younger man: “It’s a big country, we have a long experience with the occupation here, but now I think its economy is growing and there are good people there. I went to the ice-hockey championship last year in Moscow and it was very nice.”

And do you that Russia in any way poses a threat to this country?

Younger man: “Big countries are always threats – like the United States, China or Russia, it is the same for me.”

Older man: “It is a very dangerous state.”

And why do you think that?

Older man: “Because of its army and its politics.”

Younger woman: “I don’t feel any threat from Russia, but I’m not really familiar with it.”

And do you have any negative feelings because of the past, or do you think that Russia is a threat to this country? 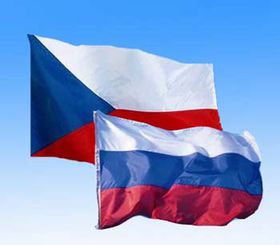 Younger man: “No, I don’t think that Russia is a threat at all. In the past, yes, I had some very negative feelings about the Russian government during the communist era, but not the people.”

Older man: “I think that Russia must go down the democratic path for many years, even decades and then maybe it will be possible to repair its image.”

What was evident in talking to this small cross section was that negative feelings towards Russia were strongest among the older generation, although some younger Czechs also expressed concerns about the proverbial Russian bear. Vladimír Votápek is a specialist on Russia and served as consul general in the city of St. Petersburg. I asked him to asses the current state of Czech-Russian relations:

“These relations are not as bad as they could be, but they are definitely not excellent. In fact, the Czech Republic is not important as a partner for Russia – Russia sees stronger and more important players on the European scene. They consider the Czech Republic as a territory in which they are supposed to have some influence, but they don’t see us as an equal partner in the system of international relations. From a psychological point-of-view, it is difficult for Russia as the former Soviet Union to swallow that we are trying to play an independent role.”

So why do some Czechs retain such a strong sense of suspicion towards Russia? 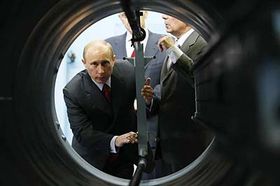 Russian Prime Minister Vladimir Putin looks at machinery while touring the Almaz-Antei consortium, producing air defense weapons, photo: CTK “I think that many people understand that Russia still hasn’t accepted the fact that the Soviet Union has ceased to exist. Russia is a much weaker player than before; the colonialist system of the Soviet empire definitively fell. So it is a problem of Russian society and Russian elites towards former socialistic countries and of course former Soviet countries. It is much more bitter or difficult for them to swallow.”

“For a long time, Russians did not view the Czech Republic as an independent state and even today you still hear the name Czechoslovakia being used. But gradually, they are beginning to see it as an independent country in Eastern Europe and in that they are seeing a kind of bridge between Russia and Europe.”

Indeed, following the Velvet Revolution, NATO membership, EU entry and several other steps underlined that Czechs were eager to align themselves away from what they viewed as the artificiality of the Soviet sphere of influence. Today, Czechs often proudly state that they are at the heart of Europe, rather than being Eastern European. So has the relationship with Russia now healed? Natalia Sudlianková again:

“I hope that the relationship will be better because as the months go by we are more and more integrated into Western Europe, to the European Union and NATO. And I would say that Russia is more and more calm in terms of its relationship to the Czech Republic. Secondly, I believe that Russia will have much more difficult problems to deal with, so I hope that they will, shall we say, forget about the Czech radar.”

Yet the pains of the past still linger. A frequent comparison is made between Germany, which fully recognized its Nazi wrongdoings, and Russia, which many feel has not yet come to terms with its own past misdeeds, including the invasion of Czechoslovakia in 1968. I put that question to Vladimír Votápek:

“We have centuries of co-habitation with Germans and the relationship only went wrong during the 19th century and then of course in the first half of the last century. But Germany was defeated, and Germany accepted that and went through a process of de-Nazification whereas Russia in fact changed very little and the process of de-Sovietisation didn’t happen. So many in the Russian political sphere as well as many citizens still consider the Soviet era as better than the current democratic era – or so-called democratic era.”

Natalia Sudlianková believes that Russia will never become apologetic for its past behaviour:

“I am absolutely convinced that it will never happen this way. There are several reasons things played out the way they did. Firstly it was not something that Russia did to others. Bolshevism and then socialism was in fact most damaging to Russians because it was they that had the worst standing in the whole Soviet Union. That might seem shocking but if we look at history, then we see that at the time of the great horrors and massacres of the 1930s, it was Georgians that ran the country. And in the after war years, the country was run by Ukrainians. So as for Russians accepting any sort of blame for what happened, I doubt that will ever happen.”

No doubt, many would strongly disagree with that assessment of Russian history, but what remains clear is that a younger generation both in Russia and in the Czech Republic appears more willing to bury the past and instead look towards the future.