Is Český Krumlov still the model for Czech-Roma relations?

The conditions in which the Czech Republic’s Roma minority lives have not improved in the last decade, in fact many of the groups working with Roma issues say their situation in Czech society, and relationship with Czechs, is in a gradual downward spiral. Unemployment among the Roma is said to be at more than 80%, high debt is rampant, and this has fostered social exclusion and breeding grounds for crime and drug use. And in turn violent crime against Roma communities has become, if not more prevalent, then more extreme. In this week’s Talking Point we check up on the situation in the South Bohemian town of Český Krumlov, often cited as the best example of Czech-Roma coexistence in the country.

It is very true that throughout the communist era the Czechs and Roma enjoyed good relations and according to the mayor of Český Krumlov, Luboš Jedlička of the Civic Democratic Party, the town continues to reap the benefits today. 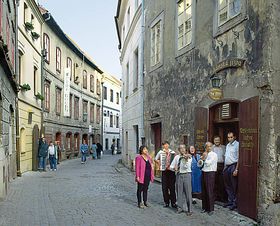 Cikánská Jizba, photo: www.ckrumlov.cz “The integration of the Roma community here goes back to the end of the Second World War, when this area was designated for settlement and among those settlers there were of course Roma families. Today this is of benefit to Český Krumlov, because we don’t have many Roma families here who came around the time of the revolution. The Roma living here are the fourth generation, and they have completely integrated themselves into the day-to-day lives of the local population in Krumlov.”

Český Krumlov has the highest rate of mixed marriages between Czechs and Roma in the country. There are Czech and Roma children walking together in the street, and the “Gypsy Bar”, Cikánská Jizba is a favourite among locals of both ethnicities and tourists alike, a kind of Roma cultural embassy in an ancient side street of this, one of the most beautiful towns in the Czech Republic. But there are cracks beneath the surface of this picture. Tomáš Zunt is the chairman of the local ICOS citizen’s association.

“Krumlov is well-known for the relatively problem-free coexistence of the Roma minority and the majority population. Nonetheless, unemployment and problems with housing are getting worse in the Roma community. There is a certain degree of ghettoisation occurring, with the Roma moving into a single location, there is of course latent discrimination where employment is concerned. Krumlov is starting to have some of the problems of other places characterised by social exclusion. It is not an ideal situation.”

In this town of 14,000 people there are several organisations like ICOS providing social assistance for local Roma in the form of everything from legal council to educational opportunities and channelling of EU funding. But for all of these options there seems to be an important ingredient of trust missing, because often the Roma will not take advantage of them. Instead they rely on themselves and on their community centre, run out of the back of an automobile workshop on top of a hill. KoCeRo is a support base for meeting up, helping the children and sharing traditional Roma activities; Michaela Nagyová is one of the centre’s social workers. 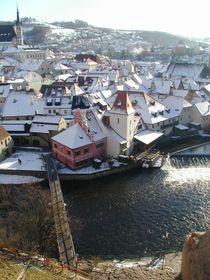 KoCeRo helps Roma with job hunting, four employees keep some 150 children busy and caught up with their school work. They work with criminal cases and with drug abuse and gambling. But for all the good work done in KoCeRo, the negative trends at work in the community are powerful.

“It’s working, for the time being. But the problem is still the social exclusion that the Roma get into. They were never separated from society or excluded before, but in more recent times they are bad payers, and they end up living all together in one place, and in that place there is then a lot of crime and drugs.”

Another factor that adds to increasing Roma isolation is the migration of Roma from more distant communities that have no bond to the local Czech population. Mayor Jedlička says he differentiates between Roma, who play a positive role in the community, and “gypsies”, who he says often come to prey upon the towns tremendous numbers of summer tourists, and he counts on the “Roma” to deal with the “gypsies”.

“Sometimes community leaders contact me and I always tell them the same thing: if you didn’t have a Roma community before and gypsies have moved in, then you have to help yourselves. If there are already some Roma families in your area try to communicate with them and discuss how to resolve the situation. That’s the only model for getting along with that community. Repression or anything like it really does not help anything.”

For all the bleakness of this situation, Český Krumlov is still one of the best places in the country for Czech-Roma relations. What people often cite as a decisive step in keeping the situation on track after communism is the municipal maintenance company Dunka, through which the Roma community was charged with keeping the city’s historic district clean after the revolution. Desiderius Dunka runs the company and is one of the leaders of the Roma community. Cikánská Jizba, photo: www.ckrumlov.cz “Back then our people didn’t even know what the revolution was. They’re only starting to find out now. During communism they had everything taken care of for them. They had work and the money to buy what they wanted. If the situation is better in Krumlov than elsewhere it’s thanks to the post-revolution mayor Vondrouš. When they were looking for a company to clean the city he said ‘No, we want a Roma company’, because he knew the Roma would eventually lose their jobs in the factories.”

The Dunka company is an inspiration for how practical cooperation between the city and the community can work, but it alone is not nearly enough. Štefan Milo is also a member of the Roma community.

“I saw this coming and said, when the Roma start losing their jobs, it’s going to get bad. They are going to become a burden on the majority, and that is how the majority now sees us. Judging whether they are right to see us that way is complicated. When I look at it from their perspective and see 90% of Roma unemployed and living off our taxes I don’t like it either. But we have to find the cause of this. We can’t expect a helping hand from the Czech community, but if we don’t solve the problem then it’s a ticking time bomb. The Roma may not be attacking and murdering each other now, but in this situation that’s only a matter of time.”

In the most vicious of circles, unemployment leads to social exclusion, and the socially excluded are undesirable for employment.

“Today’s young Roma have never worked in their lives. They live in an isolated society now, they are not in contact with the majority community, so that community can’t have any influence on them – it can’t guide them or advise them, or say ‘this is good, this is bad’ the way it used to be. That’s gone now, unfortunately.”

Integration is the starting point from which most of the organisations in Český Krumlov are trying to confront the cycle of unemployment and social exclusion. And the lucky thing about the situation here is that integration means simply getting back to the way things used to be. Michaela Nagyová again:

“People here in Český Krumlov were always able to accept the Roma. And that feeling is still here; they accept them as normal people. Their culture doesn’t suffer here. I’ve spent my whole life here growing up next door to the Roma and seeing their customs and traditions, and I like it very much and I respect it. And I think that’s the way most people here are.”

A poll recently showed that some 76% of Czechs would rather not have a Roma family living in their neighbourhood. One of the main things that the experience of Český Krumlov suggests is that overcoming that attitude is a powerful step in improving Czech-Roma relations overall.