Downhill skiing and snowboarding are immensely popular in the Czech Republic and there are a slew of mountain ranges and resorts to choose from. Skiers can opt for ski hills like Ještěd near Prague or centres further east, such as Dolní Morava. But today, we visit Špindlerův Mlýn in the Krkonoše Mountains, one of the most popular ski destinations in the country. We’ll check out the ski hill, take a short tour of the town and even bomb down a sled track. 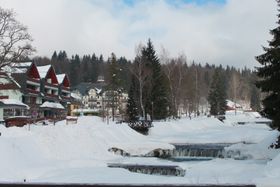 Špindlerův Mlýn, photo: Ondřej Tomšů First, a bit of history: if you’ve never been to Špindlerův Mlýn, located in northeast Bohemia near the border with Poland, you’ll be interested to know the original settlement served miners who worked in nearby ironworks, documented in the 16th century. In the 18th century, a clerical mistake in connection with the commission of a new church led to the town being renamed Špindlerův Mlýn, meaning Špindler’s Mill.

Until then, the village in question had been known only as Svatý Petr. Špindlerův Mlýn referred to a mill which served as a common meeting point which used to stand in the town’s centre and belonged to the Spindler family. It was there the document commissioning the church was sign and the mistake was made. Eva Filipová, a town hall official, told me more.

“We are in the place where the history of Špindlerův Mlýn began. In the beginning there were three villages which were in close proximity. They were Svatý Petr, Bedřichov, and Labská. Today they are united under one name, which is Špindlerův Mlýn.”

JV: The name of the town has a special ring to it: most Czechs know it and I expect more and more foreigners as well.

“Well over time it became quite famous. Also, the name Špindler is very special and is still quite common here.”

JV: The family name is still here… so the history still alive.

“It is still alive.”

JV: Now, we are standing here on what is a beautiful day, lots of snow all around, an excellent ski season so far. But there is no remaining evidence of the mill. No remaining founding stone from the building where the document was signed…

“That’s right. The year we are talking about was 1765. Nobody then thought about preserving the mill for us today.” Špindlerův Mlýn, photo: Ondřej Tomšů JV: Because we are in the Krkonoše (Giant Mountains) when did skiing actually begin here?

“In general, skiing in Krkonoše began with Harrach, who, as an employer had a huge impact. His family owned much of the Krkonoše area, including what is now the famous town of Harrachov as well as Špindlerův Mlýn. He brought skiing from Norway. That was at the beginning of the 19th century. At first it was only practised by locals who had work here in the winter, but as more and more people came from Prague and elsewhere, more and more people wanted to try skiing and so that was the start.”

Over the course of the 19th century, Špindlerův Mlýn was transformed into a resort town and downhill skiing slowly grew in popularity. Things sped up much later, with the first lifts. The biggest advances came after World War II and skiing’s popularity grew in the 1960s, 1970s and 1980s in then communist Czechoslovakia, when it was common for workers and their families, for example, to make use of state-owned lodges during their winter holiday.

The last 25 years of so saw changes in the sport and resort services again. Better equipment and much faster and more comfortable lifts. René Hroneš, a ‘Špindl’ native, grew up skiing on the local slopes; he is also the marketing director at Skiareál Špindlerův Mlýn:

“Špindlerův Mlyn is known for its good quality skiing, for great snow conditions and for excellent services and ski industry services. We have over 25 kilometres of daily-groomed slopes within the whole ski area and we have five chairlifts, from basic two-seaters to the latest technology, which is a covered and heated six-seater chairlift, and we have 11 more lifts and T-bar lifts in the area, so it is a pretty big resort. It is the most slopes in such a compact area.”

JV: There is a character to this place, the fact that it is a valley is important… 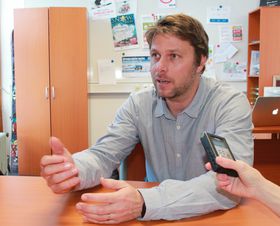 René Hroneš, photo: Ondřej Tomšů “The town or mountain village lies in a valley so you have skiing on both sides of the valley. One area is called Medvědín and the other is Svatý Petr. The valley gives a very unique feeling to the town” when the lifts shut down at 4 PM, it’s not that skiers are jumping into their cars and leaving the valley. Many of them stay in town, walk around, taking part in apres ski fun, go ice skating and have gluvine and just enjoy their time here.”

JV: The changes that are planned, what is the essence of those?

“We invested some three million euros into not only the latest chairlift but also into snowmaking systems to ensure that the season begins as soon as possible. But the biggest change which is going to happen, we believe in less than one year, is a new connection between the two main hills.

“The plan is to build a huge parking lot which will have the bottom stations of two chairlifts on the roof. One will head towards Svatý Petr, the other, Medvědín. There will be two new slopes coming back and on the other side, the opposite side, there will be a 10-person gondola lift, with one new slope. In this way, we will be able – from one point – to connect, skiing-wise, both sides of the valley.”

“That will raise the number of slopes to more than 40 kilometres and that will be the most for one spot in the Czech Republic.”

JV: We were talking before about the very nature of skiing and how what customers want has changed…

“We have seen a progression in the way people enjoy skiing and technical advance in ski equipment, namely carving skis, has changed the sport. In the past, a lot of skiers wanted black diamond slopes, to ski fast over difficult terrain, but that has changed.”

“People now enjoy red and blue slopes much more, which are easier, where they can enjoy the moment more. That is good for us as well, as there is less danger on the slopes. So all of our new slopes will be either red or blue.”

Final question: I wanted to ask about professional events which were hosted here… 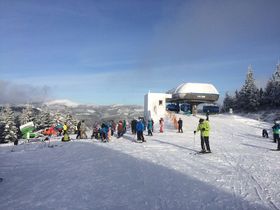 Špindlerův Mlýn, photo: Jiří Fremuth “There were several women’s World Cup events in the past, four or five times, and we are very happy that we have gotten permission to run another World Cup event for women’s slalom and parallel slalom in March 2019. Also, every March we have a tradition of hosting Snow Jam, which is a snowboarding event. It is part of the World Cup series and this year is the last year that riders will be able to qualify for the Olympics. So we expect many top snowboarders and that a lot of people will attend.”

René Hroneš, marketing director at Skiareál Špindlerův Mlýn, suggested we should try the slopes for ourselves. Radio Prague colleague Till Janzer (of our German-language section) and I got on the hill soon after.

JV: So Till, you know this ski hill well…

“I do, I’ve skied here in the past, maybe around 15 times, but that said, this is my first time on skis this season.

JV: Ok, well we’ll tape a bit of sound of as we go down the slope now, see you at the bottom!

Over the course of the afternoon, we spoke to numerous skiers and snowboarders; one was a gentleman by the name of Niall Anderson, at the ski hill with his wife and daughters.

JV: What brings you over here to ‘Špindl’?

“Well, the skiing and I have a friend who lives over here and is married to a local girl.”

JV: Is it the first time that you have been here?

“This is the second time we have come. This year there has been lots of snow; last year was too warm. But it’s a very nice place and the people are friendly.”

“Yes, but we have nowhere to ski! We have some hills but no mountains.” 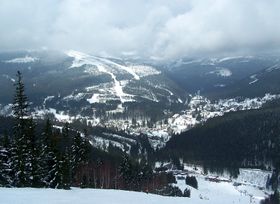 Špindlerův Mlýn, photo: X-Weinzar, CC 3.0 JV: What are some of the places in Europe that you’ve skied?

“Austria and France… America and Canada. And Scotland, but Scotland is very cold.”

How does this compare?

“It’s small but there is obviously plenty of scope for expansion. And all of the advice that we received was ‘Come now’. Before everyone else finds out about it.”

We also spoke with one of the daughters.

“I’m Charlotte Anderson. It has been a bit foggy at times but there has been lots of powder and fresh snow. It’s very good, the lifts aren’t that busy, so you get up quick.”

All in all an excellent experience and as we heard skiing is far from the only activity Špindlerův Mlýn has to offer. On the day we also took a wild three-kilometre sled ride which knocked our socks off (if you don’t believe me, you can hear the swoosh of the sled if you check out this story in audio). The track traversed the road at three points where sledders had to stop. We spoke to a group who had just come hurtling down the track at speeds most would be reluctant to try. Here are their impressions from their day at Špindlerův Mlýn.

JV: Is it faster than you expected?

JV: Where are you from?

The Egyptians were a loud group who shouted as cheered with each new arrival, especially one rider who was covered largely in snow.

JV: Tell the truth, how many times did you bail? Because you are all covered in snow! 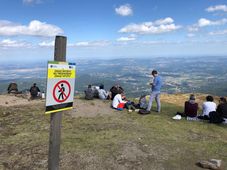