In 1992, Czechs marked their first UNESCO success, when Prague, Telč and Kutná Hora were added to the UNESCO list of World Heritage Sites. Today, the Czech Republic has twelve entries on the list and others have been put forward. Holašovice, photo: Ben Skála, Benfoto, CC BY-SA 3.0 Unported The historic centre of Prague, Telč and Český Krumlov were the first sites in the Czech Republic to become part of the prestigious UNESCO World Heritage Sites back in 1992.

In the following years, they were joined by another nine sites: the Pilgrimage Church of St. John of Nepomuk at Zelená Hora, the Lednice Valtice Cultural landscape, the gardens and castle in Kroměříž, the historic village of Holašovice, the Litomyšl Castle, Villa Tugenhadt in Brno and most recently, in 2003, the Jewish Quarter in Třebíč.

Dita Limová is the head of the UNESCO Division in the Department of International Relations of the Culture Ministry.

“There are currently over one thousand items on the UNESCO World Heritage Site list and the Czech Republic has twelve entries.

“In terms of the number of items and the country’s size, we are among the top 25 countries. So I would say we are doing really well.”

The Czech Republic recently submitted several nominations to the UNESCO committee, but as Ms Limová points out, the approval process has proven to be increasingly more complicated. With the number of UNESCO sites gradually increasing, it is not easy to find something really unique. Nowadays, industrial monuments, for instance, are more likely to be added than historical city centres. 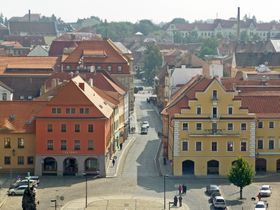 “I would say that Žatec is currently our closest candidate for victory. The nomination concerns the unique architectural monuments linked to the processing of hops. We submitted the proposal in January this year.

“Žatec is an example of architectural heritage linked to a specific industry. We hope we can succeed, since there aren’t many similar items on the list, and there is definitely none linked to hops.”

Another Czech nomination for UNESCO listing, which will be officially submitted in January next year, is the national stud farm in Kladruby in Central Bohemia. Founded in 1579, the farm is known for its Kladruber horses, one of the oldest breeds in the world. Kladruber horses, photo: Strahinja Bućan The nomination aims to establish the Kladruby landscape, including the stud farm, grazing land, forests, and everything else related to horse breeding, as a unique site in Europe. The Czech Republic is also cooperating with other European countries working on joint nomination projects, as Dita Limová outlines:

“Another nomination is the mining region of Krušnohoří. It is a joint project with our colleagues from Saxony. That will also be submitted in January.

“And then there is the Town Spas project, a joint project of seven European countries. There are altogether eleven towns, and for the Czech Republic it is Karlovy Vary, Mariánské Lázně and Františkovy Lázně.

“So in this case, the preparation process is quite complicated and we still need some time to prepare the ground.”

As Dita Limová points out, the listing as a UNESCO Heritage Site is a not the end, but rather a beginning of a long process; the UNESCO department has to make sure the site is maintained for future generations.

But it also has to deal with controversies, such as the skyline of Prague’s historical core or the revolving stage in Český Krumlov. Revolving stage in Český Krumlov, photo: Juandev, CC BY-SA 3.0 “It is a very delicate topic. Each of these monuments was listed because of some unique value that needs to be protected. The revolving stage in Český Krumlov definitely has its supporters, but unfortunately it stands in the middle of baroque gardens and doesn’t really fit in the setting. So we have to find some solution that can benefit both parties.

“As far as Prague is concerned, it is difficult to protect the historical centre and at the same time enable the capital to develop, and keep the inflow of tourists at a reasonable level. So it is a complicated situation and we are under a lot of pressure, but we hope Prague will find a way to solve it.”

Besides valuable historical sites, the Czech Republic also has a large number of items on the UNESCO list of intangible cultural monuments, including the puppeteering tradition, slovácký verbuňk dance, Hlinecko region carnival processions and masks and the south Bohemian ride of the kings. 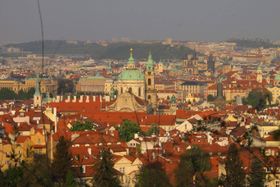 Prague, photo: Kristýna Maková There are also a number of Czech representatives on the UNESCO Memory of the World Register. Its international advisory committee recently recommended the enlistment of the Leoš Janáček archive, a documentary fund including the heritage of one of the world’s greatest 20th century composer.

Another candidate is the Great Siege of Malta Map by Giovanni Francesco Camocio, from the second half of 16th century, which was discovered at the Charles University map collection in Prague and finally the Kynžvart daguerreotype made by Louis Jacques Mandé Daguerre in 1839 and donated to Austrian Chancellor Metternich. In addition to being amongst the oldest establishments of its kind in the world, the stud farm in Kladruby nad Labem is home to the…