Zuzana Ruzickova on the power of music

And now for the first in our new weekly mini-series, in which David Vaughan lets people speak for themselves. People who have experienced moments of drama, excitement or tragedy at first hand recount a single, unforgettable episode in their lives. In the first of the series, we go back to the dark days of World War Two.

Zuzana Ruzickova, who celebrated her 75th birthday earlier this year, is one of Europe's most acclaimed harpsichordists. She looks small and frail, but is a woman of great inner strength, which you sense almost the moment you meet her. Sixty years ago she lived through hell. As a teenager, at the height of the Second World War, Zuzana Ruzickova and her whole family were sent to the Terezin Jewish Ghetto north of Prague. Only she and her mother survived the next three years in the camps. In the following two minutes recounts a horrific and moving episode from that time.

"Well you know I was from the year 1942 in the ghetto Terezin and then afterwards I went to Auschwitz. From Auschwitz there was a selection and a thousand men and a thousand women were selected for work in Germany. And we came to Hamburg. Hamburg was burning. It was under fire from British and American airplanes, and one day we were chosen, I with my mother, to work in the docks. It was a very wealthy shipping company, which did a very unusual thing. They took us into the canteen and gave us soup at noon for lunch. Since Terezin I didn't hear any music at all, and in that canteen there was a radio going, and on the radio somebody was playing Chopin. And this was an absolute shock to me, because I somehow didn't realize that there was life going on and people playing the piano while we were struggling for survival, and it was such a shock for me that I fainted, which never happened to me before and indeed never afterwards. They took me into a room and tried to revive me. My mother went with me and she told me afterwards that the German - I'd don't know if he was SS or a soldier - the guard looked at me and said: "Funny, she looks almost human." 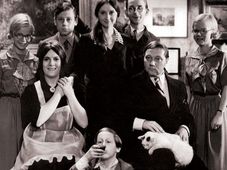