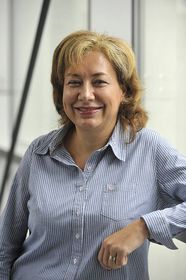 Klára Stejskalová I started working for Czech Radio upon graduating from the Philosophical Faculty of Charles University in 1993. I picked up my first work experience in the international service where I spent approximately a year. Then I joined the foreign department of Czech Radio’s news channel Radiožurnál and the world opened up to me. In the years that followed I travelled extensively covering summits and elections, I reported from The Vatican when the world mourned the departure of Pope John Paul II. I specialized in coverage from Turkey, Italy and German-speaking countries.

The best time of my professional career was the four years I spent in Berlin as Czech Radio’s foreign correspondent.

In the years 2006-2010 and from 2014 to 2016 I headed the foreign department of Radiožurnál and in September 2016 I became Radio Prague’s editor-in-chief. In past years I and my team would bring world news to the Czech Radio audience, now my work is to relay information about the Czech Republic to people abroad. However the core of my work remains the same, radio journalism has always been my hobby as well as my profession and I have always done my best for my reports to be informative and entertaining.

In my free time I love being with family and friends, travelling, reading, going to the opera and even to a football match. I am very lucky in that my hobbies and my work often overlap.